Showing 3 of 7
Prev Next 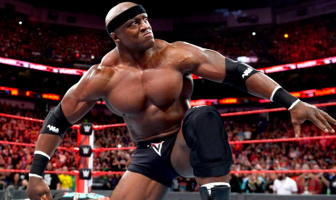 I like Bobby Lashley. Sue me. Outside of struggling with confidence on the microphone, which is why they have Lio Rush, he’s the total package. If WWE were to book him consistently as a legitimate monster, on the level as someone like Brock Lesnar, there’s no reason he couldn’t be one of the top stars on Raw. Unfortunately that consistency just hasn’t been there. Flip-flopping titles with Finn Balor, constantly pointing at his rectum, and sharing the spotlight with the likes of Drew McIntyre and Baron Corbin — it just makes it a bit difficult to take him seriously. I would like for that to change.

Money in the Bank would cement in your mind that WWE is looking at turning Lashley into a world champion. That level of investment alone would be enough to get me interested. It’d be great to see Lio Rush running around with the briefcase, causing constant mayhem. With Lashley moving up to the world title picture, maybe Rush could even go after that Intercontinental strap!

Showing 3 of 7
Prev Next