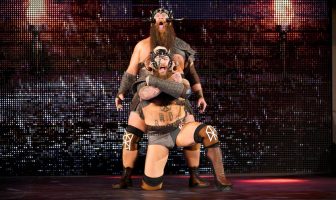 I’ll be honest with you. I’m somewhat scared that moving to the main roster is actually going to be a step backwards for the – cringe – Viking Experience.

I’ll get over the name. I think it’s stupid, like everyone else on the planet, but there’s no point in continuing to stress over it. It’s not going to change. But my concern is with WWE’s frustrating need to punch you in the face with their gimmicks. There can be no room for subtlety. In NXT the War Raiders were two badass dudes embracing their Viking heritage and love for the lore by applying it to their gear and their gimmick. In WWE they’ll end up being actual Vikings.

I worry about them because I’ve seen what WWE did with The Ascension. And with Sanity. And with The Revival up until they threatened to quit the company. And the Authors of Pain. They keep getting these guys who were major successes for the NXT brand, many of them former champions, over with the fans, solid in their gimmicks — but they have no idea what to do with them. I’m hoping this is not the case for the – cringe – Viking Experience. Ugh.