There have been a lot – and we mean a LOT – of random tag teams throughout the history of WWE. Some have been huge successes, generating millions of dollars and becoming household names. Others… Well, not so much.

Just for fun, we decided to put together a list of some of the more notable tag teams you may have completely forgotten about, or just straight-up didn’t know existed. Let’s get started! 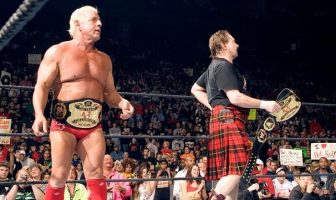 Back in the era of Taboo Tuesdays and Cyber Sundays, before the Nature Boy’s WWE career came to an end, the fans actually voted PIper in as his surprise partner to face the World Tag Team Champions, Kenny and Mikey of the Spirit Squad.

While the two Hall of Famers only held on to the gold for eight days, dropping the titles to Rated RKO on Monday Night Raw, their very brief reign was one last accolade in Hot Rod’s historic career that will never be taken away from him. Woooo!