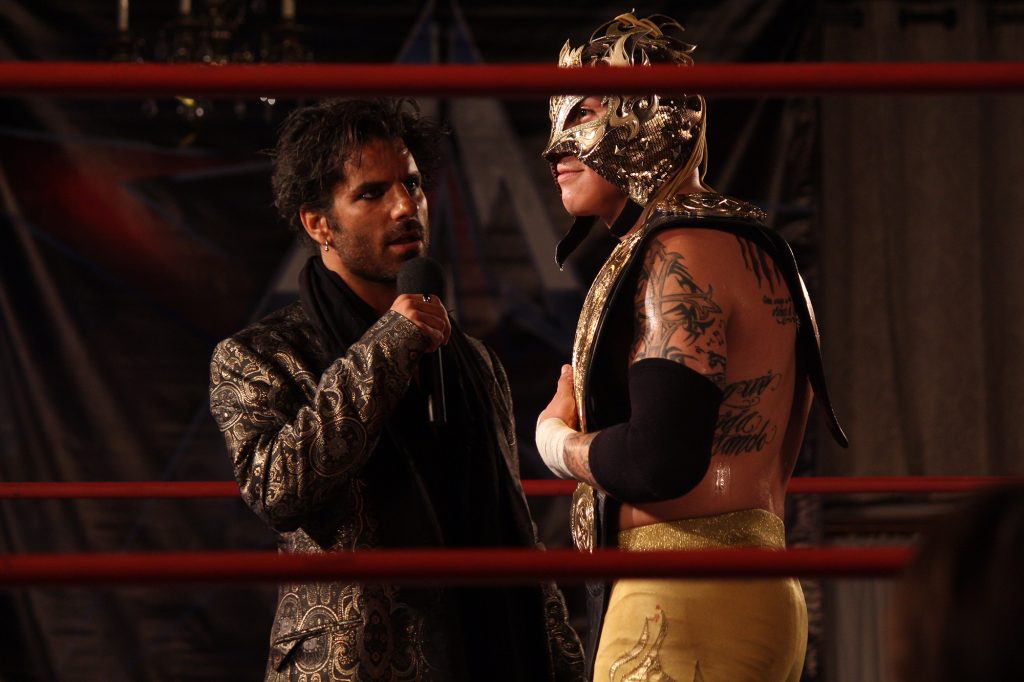 – Long time AAW commentator Phil Colvin kicked off the show announcing that this would be his final show at the Berwyn Eagles Club. He thanked all the fans for making Berwyn his version of Madison Square Garden or the Tokyo Dome.

(1) DJ Zema Ion def. Austin Theory, Stephen Wolf, Curt Stallion, Myron Reed and AR Fox in 11:01. This was the high-flying spectacle match to kick off the show, featuring a lot of Michael Elgin’s top trainees who all have the talent to become major stars. Hard to tell who stole the show here as everyone delivered, but Reed and Theory probably stood out the most to me. DJZ got the win to earn a shot at Pentagon’s AAW Heritage Championship on 11/25.

– Backstage promo where David Starr and Jeff Cobb beat down Jake Crist of OI4K ahead of their scheduled tag team match.

(2) Colt Cabana & Chuck Taylor def. The Hooligans in 8:00. Really entertaining match with a nice blend of Colt’s usual comedy routine and some good, hard-hitting back-and-forth wrestling. Colt and Sexy Chuckie T make a really hilarious pairing. They did a spot where Chuck couldn’t figure out how to do a suicide dive by jumping off his partner’s back, so he carefully fell over the top rope and gently landed on his opponents. Everyone sold it like it was some brutal spot and the crowd chanted “holy s–t”.

(3) Delilah Doom def. Veda Scott in 8:13 to advance to the second round of the AAW Women’s Championship Tournament. Veda did a pre-match promo claiming that everyone came to see her, and demanding that the energetic Delilah calm down. They had an okay match that got better in the last few minutes as the crowd got behind Doom’s “aerobic” style comeback.

(4) Kylie Rae def. Su Yung in 11:33 to advance to the second round of the AAW Women’s Championship Tournament. One of the best matches of the entire show. These two tore the house down, and the crowd was on fire for the debuting local Kylie Rae as soon as she hit the ring. Su got booed hard as the heel, but her “Undead Bride” gimmick is the coolest thing live. Hard-hitting match with lots of comebacks from Kylie, lots of excellent character work from Su.

(5) Michael Elgin def. Shane Strickland in 19:15. These two work so well together, which comes as no surprise as Elgin works well with literally everyone. Match of the night in my opinion. Continuing the streak of Big Mike stealing the show, just a few weeks after he won the Jim Lynam tournament, which should put him in contention for the title very soon. The crowd was hot the entire time and came unglued when Strickland kicked out of the Elgin bomb 18 minutes in. Mike hit the Buckle Bomb and a second spinning Elgin Bomb to put it away.

(6) Paco def. Connor Braxton in 15:35 in a “Fans Bring the Weapons” match. What a ridiculous amount of fun this was. I’m trying to remember the last time I went to a show in the area and these two weren’t opening, and this was the perfect way to blow off a long, slow built rivalry. Happy to see them finally get a chance way up the card too. Some of the items that got used included a Bop-It toy, a pumpkin filled with thumb tacks, a piñata, Braxton’s hoverboard, a guitar, a Roman Reigns toy bracer (and yes he did the “Ooaa” pose and hit a spear), a television set up between two chairs, and a hockey stick. Paco won by hitting a Destroyer into a giant collection of chairs and various items covered in thumb tacks.

(7) Trevor Lee def. Eddie Kingston in 7:55. I unfortunately missed this match as I was doing interviews during intermission that ran long.

(8) The Besties (Mat Fitchett & Davey Vega) def. Dezmond Xavier & Zachary Wentz (c) to become the new AAW Tag Team Champions in 10:15. The story behind this is that The Besties have basically been broken up for several months in AAW as Fitchett has tried to go solo and do something for himself. Vega as the heel (he gets SO MUCH heat in Chicago) kept trying to put them back together, and has basically kept The Besties going against his partner’s will. He got this title match for them, and despite constant miscommunication and Fitchett actually trying to go after his partner, Davey pulled out the win.

(9) David Starr & Jeff Cobb def. OI4K (Dave & Jake Crist) in 9:06. Starr cut a promo before the match calling OI4K cowards, and talking about how good he is at WRSTLING (not a typo). Dave came out and went after them himself, and the “Iron Manager” JT Davidson joined in to help as best as he could, but Cobb suplexed him through several chairs. Jake stumbled out to make the save late into the match. Trevor Lee then came out and attacked Dave, leading to a ridiculous Tour of the Islands from Cobb into a sleeper from Starr to get the win.

– Starr, Cobb and Trevor Lee all beat the heck out of OI4K after the match until Eddie Kingston ran out. Starr took out Eddie to heat up their excellent program together, until AR Fox came out with a baseball bat and chased them all to the back.

– It’s now time to see which “former world champion” will be making his surprise return to Berwyn, fighting for the AAW title… The fans chant for “Jimmy Jacobs” but the lights go off and out comes “Walking Weapon” Josh Alexander! Huge pop for Weapon’s return, who we have not seen for more than a year!

(10) Rey Fenix (c) def. Josh Alexander in 17:26. They worked a really solid main event match, but the crowd died way down after the initial pop for Alexander’s return. There was nothing wrong with the match at all, I think it was just a combo of a very busy night with a lot of super hot angles and matches. Really good match though.

– The crowd thanks Alexander for coming back and shows their appreciation for the champ to end the night, until… The lights go out and the crowd immediately comes unhinged, knowing what’s about to happen. JIMMY JACOBS IS HERE! The fans go wild as the “Zombie Princess” hits the ring, immediately going face to face with the champion. He got on the mic and called AAW “the house that Jimmy Jacobs built”, then told Fenix “you’re standing in my ring, holding my title.” The challenge was officially issued for 11/25 and Fenix accepted, before creepily whispering “Cero Miedo” into his ear. Jimmy took off his scarf and jacket and teased attacking him with a spike that was hidden in his boot, but smiled and left peacefully.

This was one of the best AAW shows I’ve ever been to coming just two weeks after the Jim Lynam Tournament featuring some of the best matches of the entire year. The crowd was hot the entire night as every match felt like it had some of kind story or meaning behind it. Nice blend of veteran stars and up-and-coming talent all over the card, with the women’s tournament really delivering, Elgin/Strickland giving you the MOTY candidate you almost come to expect from every core AAW show now, and the double surprise with Alexander and Jacobs at the end. Wonderful night.