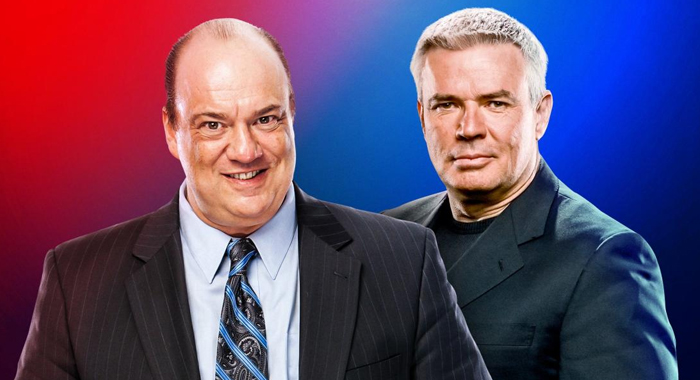 WWE has now confirmed the breaking news first reported by Sports Illustrated this morning, that Paul Heyman and Eric Bischoff have been hired as the new Executive Directors of Monday Night Raw and Smackdown Live, respectively.

The company released the following statement:

In their executive roles, Heyman and Bischoff will oversee the creative development of WWE’s flagship programming and ensure integration across all platforms and lines of business. The creation of these roles further establishes WWE’s ability to continuously reinvent its global brand while providing two distinct creative processes for its flagship shows.

PWInsider has now provided some backstage insight behind this major, unfolding situation. WWE has reportedly been working on bringing Heyman into the creative fold for quite some time now, while the decision to reach out to Bischoff came much more recently.

There was a pitch to hire Heyman as a top member of the WWE creative team, apparently in the same time frame that Bruce Prichard was brought back in a similar role. He will now head up the Monday night flagship show, and is expected to maintain his on-screen duties as Brock Lesnar’s advocate going forward.

One of Mr. Bischoff’s biggest strengths is his history working with TV executives both in and out of wrestling, most notable with Turner and Spike TV. He will be overseeing Smackdown Live and working directly with FOX executives to establish a unique brand for the network when it relaunches later this year.

PWInsider also noted that a source described the situation as being similar to Triple H running the NXT brand, as the two will be in charge of all aspects pertaining to their respective shows, while Vince McMahon continues to run the company and will obviously have final say in any situation. They are not simply members of the creative team.