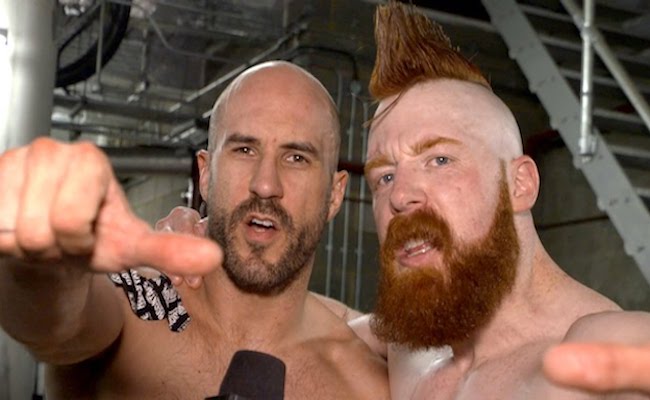 WWE stars Sheamus and Cesaro, aka The Bar, recently spoke with BBC.com to offer their Premier League predictions. Sheamus supports Liverpool, while Cesaro is a fan of West Ham, Stoke and Arsenal, and you can check out their predictions at this link.

What do @BeckyLynchWWE, @JinderMahal, and @TheNotoriousMMA have in common? They’ve all trained with @John_Kavanagh! https://t.co/ehEiHR8ShE

Former IMPACT Wrestling 2x Tag Team Champion Jessie Godderz (a.k.a. Mr. PEC-Tacular) returns to wrestling this week for the very first time since taking a break earlier this year to concentrate on TV projects, a new single, and a new film.

Godderz will be appearing at BAR WRESTLING in Baldwin Park, CA this Thursday, November 9th as 1/2 of TEAM BIG BROTHER, alongside fellow Big Brother Superstar Austin Matelson (a.k.a. Vibora the Luchasaurus from Lucha Underground).

This marks the very first time both CBS Big Brother veterans have ever appeared together for the same wrestling promotion.

Godderz has starred on nearly every BB season over the last decade (since joining in Season 10 in 2008).

Matelson appeared on the hit reality series during Season 17 in 2015.

Thursday’s event is called BAR WRESTLING 6: HEAD of HOUSEHOLD, a term popularized by the Big Brother series. Tickets for the event can be purchased here.

Since taking a break from wrestling in the spring, Godderz has appeared on CBS’ Big Brother, CBS’ The Young and the Restless, FX Network’s Snowfall, Entertainment Tonight, and TMZ, as well as recorded a debut single with 98 Degrees Legend Jeff Timmons, did a nationwide tour for his Amazon TV series TAINTED DREAMS, filmed the series New Dogs, Old Tricks (a spinoff of Sony’s film What Happened last Night), shot a Reality Show pilot with a Legendary TV Creator, and started preparing to shoot the Feature Film DAYS LIKE THIS.

Godderz’ final rivalries on IMPACT Wrestling were against the DCC (made up of James Storm, BRAM, and Eddie Kingston) and IMPACT Grand Champion Aron Rex.