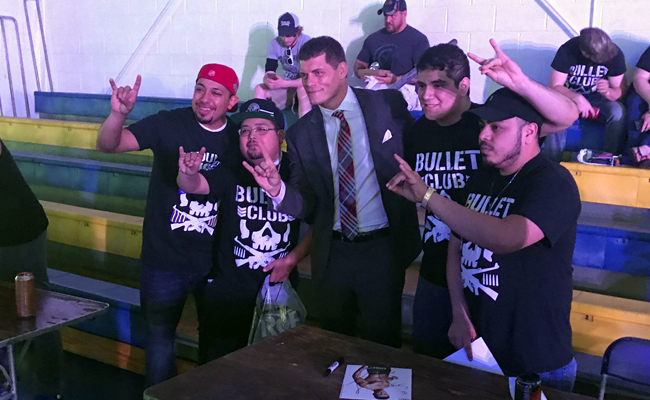 It was only a matter of time before the good brothers from Ring of Honor and New Japan Pro Wrestling were crafted in adorable, vinyl figure form. The Funko craze has spread to virtually every facet of pop culture (no pun intended), and WWE has had their own series of collectibles for quite some time.

It’s a shame we’ll have to wait a full year to get our hands on Bullet Club POPs. Which members of the infamous faction are you looking forward to seeing the most? Kenny Omega and the Young Bucks seem like an obvious lock at this point, but it would be pretty cool to see original club members like Bad Luck Fale and Tama Tanga get some love too! Sound off in our brand new comments section below!

In bizarre pro wrestling news today, Ring of Honor confirmed that Daryl Takahashi will be appearing at all four stops of the upcoming Global Wars tour in the United States. Yeah – seriously.

For those who don’t follow NJPW closely, Daryl is the pet therapy cat and best friend of former IWGP Jr. Heavyweight Champion Hiromu Takahashi. It’s probably worth pointing out that he’s also a stuffed animal… Daryl will be joining the commentary team for all of his friend’s matches during the tour, “barring any unanticipated injuries sustained at the hands of ROH and New Japan competitors.”