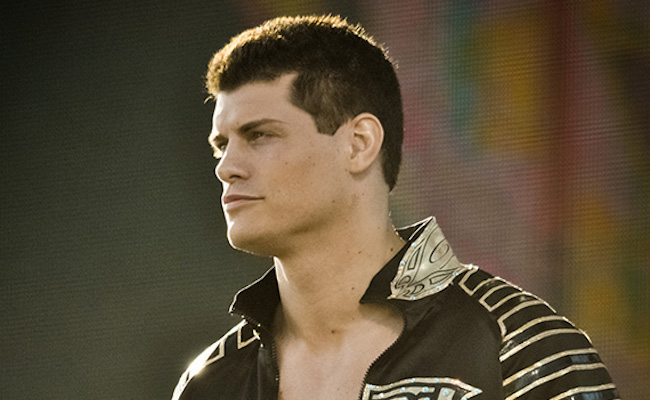 WSVN-TV Entertainment reporter Chris Van Vliet spoke with ROH Champion Cody Rhodes ahead of this weekend’s ROH Elite event in Ft. Lauderdale, FL. You can watch the entire interview in the video player below, and the following highlights have been issued:

“I just had the absolute best luck in the world in terms of meeting The Young Bucks and they might look like wild little rock stars who are irresponsible but they are business geniuses. They set up the deal with Hot Topic and they’re going to be the first 7-figure downside characters that New Japan Pro Wrestling has. The best way to put it is it’s better. It’s currently the best it’s ever been for me. So yes, I don’t want to be tacky but it’s very exciting.”

On being happier since leaving WWE:

On the best advice his father Dusty Rhodes gave him:

“Every day with him was kind of like a motivational chit-chat. That’s how he spoke. He spoke almost like a preacher whenever you spoke to him, so there was always something. I think the thing that always stuck with me was maximize your minutes. At the time in WWE I wasn’t getting a lot of airtime and I wasn’t always the one with his hand raised at the end and he believed it didn’t matter. You could still do something that made somebody go ‘Oh, I really like that guy’ or little kids that really liked Stardust. I think about that a lot because I have the opportunity to have a lot of minutes when it comes to Ring of Honor and I think about now that you’ve got them, don’t blow it. I hear his voice in my head in every match. He’s always with me.”

The legalities of calling himself ‘Cody Rhodes’:

“Oh you can say Cody Rhodes all day long. I just play it safe when it comes to television because it is WWE’s intellectual property. But it is literally my legal name, like on my ID. My name hasn’t been Cody Runnels since I was 17. But it’s theirs. At no point would I ever want to go into a courtroom with a company I have love and admiration for. I met my wife there, I got my start there, they’re the house that built me. If they want that last name they can give it to somebody in NXT.”

On Chris Jericho vs. Kenny Omega at Wrestle Kingdom 12: