I had the pleasure of attending Monday’s special Christmas Day episode of WWE Raw at the Allstate Arena in Chicago. Below is a full, in-depth recap of my experience at the show with tons of live notes and photos.

In the interest of full disclosure I was given tickets to the show by WWE, but their generous gesture in no way impacts my thoughts about the event or the company as a whole.

– Kalisto def. Tony Nese in a match taped for Main Event. Quick match with Kalisto controlling almost all the offense, with lots of kids doing the “lucha” chant.

– The Revival def. Titus O’Neil & Apollo Crews (w/ Dana Brooke) in another match taped for Main Event. Titus is a massive human being in person. He was also the most over person in this match. The Revival got a good pop when their entrance music hit but that was about it.

– Five minutes before bell time and I’d say the arena was around 80% filled. Lots of floor seats including first and second row on the camera side were wide open. By the time the first match (Cena vs. Elias) actually started I think they were approaching legit sell-out with only a few seats available here and there. I couldn’t see the upper balcony on the camera side from where I was at though.

– Before going live they aired a video package recapping WrestleMania 33 for some reason. People were really excited about seeing the Undertaker in the video, but when Roman Reigns I could barely hear myself think over the boos. There were also a ton of extremely loud “Rusev Day” chants throughout the pre-show. 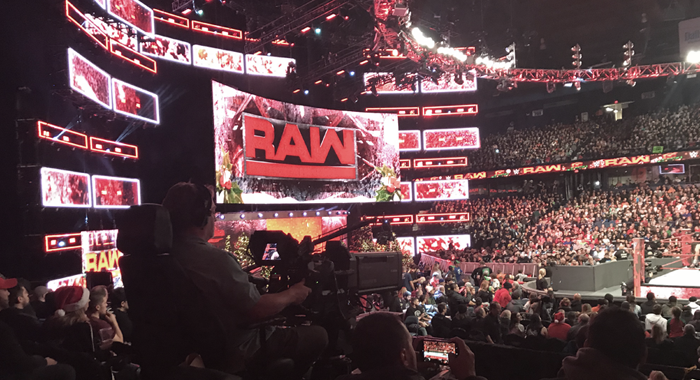 – John Cena kicked off the show to a huge (albeit split) reaction. Everyone loved singing “John Cena suuuucks” along with his theme, but the reality is once he actually got going and praised Chicago an insufferable amount of times, a good majority of them were on his side. It felt incredibly pandering to me, but at least it was effective. Elias initially got a lot of cheers but quickly got the crowd to turn on him. People were shocked that Cena actually encouraged the CM Punk chants, which of course just led to more of them. 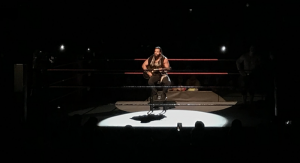 (1) John Cena def. Elias. This probably went on way too long (in total Cena was out there for about 30 minutes) as the crowd started chanting “this is boring” during rest holds. I don’t know how it came across on TV but it was crazy loud in the building.

– Kurt Angle did a backstage segment with Jason Jordan and Seth Rollins, with his “son” getting crazy amounts of heat. I got the gist that they were setting up a tag team main event, but you could barely hear anything over the disdain from Jordan. Reigns showed up to blow that reaction out of the freaking water. I heard maybe 10 words out of that entire segment.

(2) Hideo Itami def. The Brian Kendrick. Kendrick and Jack Gallagher came to the ring in the dark during the backstage segment. Very little reaction. There was a mild pop when Itami got him up for the GTS but not as loud as you might think.

(3) Absolution def. Sasha Banks, Mickie James & Bayley. This was a lot of fun live and the girls got an incredible reaction. Paige got a great pop but it was nothing compared to the reaction for Sasha. She was a mega star in Chicago and it completely blew me away. 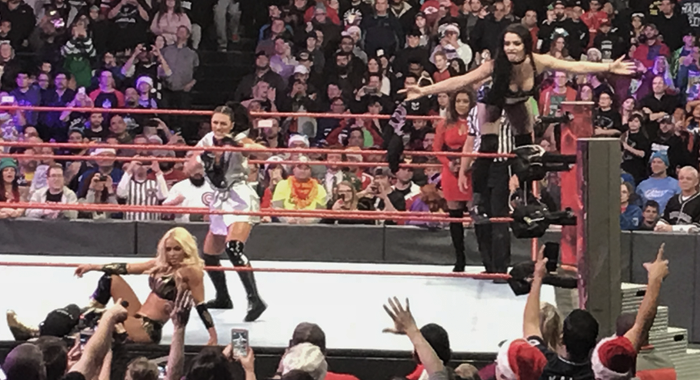 (4) Kane def. Heath Slater. Lots of “he’s got kids” chants and then one big “you’ve got kids” chant when Heath was reevaluating his life decisions. Surprisingly, Kane got one of the biggest babyface pops of the night during his entrance.

(5) Finn Balor def. Curt Hawkins. Nobody cared about Hawkins or his losing streak, but Balor got a lot of love. Being in the audience for his entrance is something special. It was kind of disappointing because the general feeling from people around me was that everyone wanted to see Finn, but this was a huge waste of his potential and there was nothing to care about.

– Bray Wyatt did a backstage promo and then made his full entrance. Out came the cell phones (aka “fireflies”) immediately. I’ve been to a lot of live shows over the years, and the only thing that comes close to Bray’s entrance is the Undertakers. Matt Hardy appeared behind him in the ring and everyone lost their damn minds. Thousands upon thousand of “DELETE” chants.

– There was a backstage promo shown on the screen, but you couldn’t hear a single word from inside the arena because people were chanting “HARDY” as loud as humanly possible the entire time.