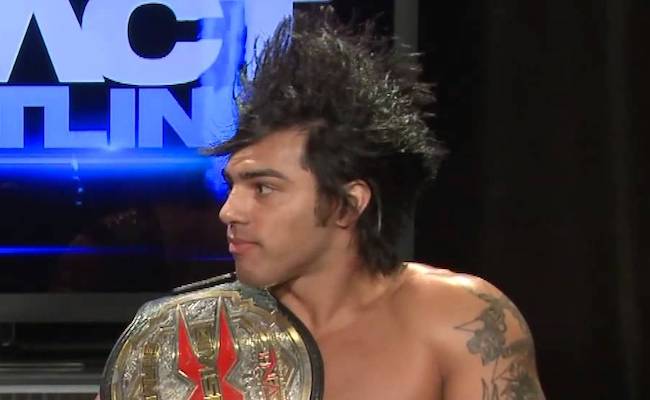 His new look and entrance attire:

“I ended up in a lot of credit card debt because I was basically a prisoner of the Mexican hospitals and they would not release me from the hospital until I paid the full balance of the surgery.”

“I paid with my credit card and am now thousands and thousands of dollars in debt and my only means of income is professional wrestling which I am unable to do because I am injured. When I’m back home and looking on the internet and browsing while thinking to myself already that I need to reinvent myself when I come back and I need to change the look up and step my game up and do something different. I found the light up costume online and thought to myself that is it. Nobody is going to have anything like that and when I saw the price tag on it, that nobody is going to be able to afford anything like that either. But I thought to myself that this is a gamble and I am already thousands and thousands of dollars in debt and this is a completely unnecessary big purchase especially since I couldn’t wrestle at the time but I looked at is as I am going to roll the dice and take a risk and put myself in even more debt.”

“I am really glad that I did because the reaction every time I come out in that costume is a bigger reaction than I have gotten in my entire career and kids love it. When you go to these independent shows, kids constantly want to get pictures with me in the light up costume and I just think it adds an ambiance now. On the Indies we can’t have our own pyro and our own light shows but if you book me for your show than you are going to get some light shows for sure.”

His current status with IMPACT Wrestling and the recent changes of management:

“For me personally I am on the outside looking in. I haven’t been at IMPACT since March and actually am not 100% sure that I will be there in November yet so I really can’t speak much on how it has been going because I haven’t been there. I will say that all of the changes in management sometimes feels like a soap opera or I feel like it could be a reality show of the day to day running of IMPACT Wrestling because there is so much drama and so many changes and so many newsworthy things seem to happen weekly, monthly or what have you. Sometimes I wonder if instead of just having a wrestling show we should just have a reality show about the wrestling show.”

“That is a big loss for IMPACT. Believe it or not, Robbie E is an underrated wrestling mind (I will say that) I’ve learned so much over the years not just about wrestling but about the business of wrestling and he’s really got a mind for it. I can see him being an agent someday for some type of wrestling company. He has a lot to offer and maybe people don’t see that if they are just judging it on his in ring work but the guy knows his stuff when it comes to professional wrestling and is good morale for the locker room because everybody loved when Robbie was around and he was always cracking jokes. He just had an amazing ability that I wish that I personally had and that is that he can get over with literally anybody. It doesn’t matter if there is a language barrier, what your personality is or how polar opposite they may be, Robbie E can get along and get over with literally everybody and I wish I had that because he has amazing people skills.”

For this and every other episode of The Two Man Power Trip of Wrestling please subscribe to us on iTunes, Podomatic, Player FM, Tune In Radio and The IRW Network, The EXCLUSIVE home of The Triple Threat Podcast featuring Shane Douglas & TMPToW. As well as follow us on Twitter @TwoManPowerTrip.