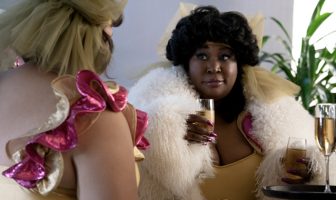 Kia Stevens has been wrestling for more than 17 years under the alias of the mighty Awesome Kong, but three years ago the former women’s champion tried on a brand new role for a Netflix series called GLOW – the Gorgeous Ladies of Wrestling.

As the third season of executive producer Jenji Kohan’s hit series springboards towards its third season, dropping on August 9th, we caught up with Kia to discuss her powerful performance as the “Welfare Queen”, as well her shocking debut at All Elite Wrestling’s Double or Nothing pay-per-view this past summer.

So here you are one of the most recognizable and respected names in women’s wrestling, maybe ever. You’re a former champion, trained extensively in Japan. You’ve been to Germany, Australia, Mexico, Canada. So what made you look at GLOW, something so unique from what you’ve done before and say “This is my next step…”

“I grew up a child actress, so when I got into wrestling I actually had an acting background. The reason I even picked up wrestling so quickly – I kind of just got thrown into the fray. I went straight to Japan, and had to learn as I went. My first match in Japan was a main event match, and I had only taken my first wrestling fall barely 8 weeks before that. So I had to draw from my acting experience, because I wasn’t a wrestler yet. I didn’t know how to wrestle, but I knew how to act like I could wrestle.”

“That kind of fake-it-till-you-make-it is what got me through my initial tenure in Japan, and my first few years in wrestling. It has always been my goal to come back to acting. The plan has fallen into place, so to speak. My mother, who was an actress as well, always planned for me to be an actress. I fell in love with wrestling, so I kind of took a detour.”

All the characters on GLOW are fun, but Welfare Queen in particular shines a very real light on the exploitationism, and stereotypes, and the underlying root of racism in Hollywood, and in wrestling as we well know. This is addressed headfirst in the season two episode “Mother of All Matches”. What was it like to tackle such an important role?

“Being a woman of color, and having grown up in the entertainment industry … seeing as how [my mother]was in entertainment, you often have these conversations about how it is, being of color and what you’re offered as an artist. Sometimes just having to take what you’re offered as an artist, just to get your foot in the door. There’s no prize for turning down taking the role of being a thief, or a gang-banger, or a hooker. You could totally say, ‘Hey I don’t want to do that, because I don’t want to have my culture reflected in that way,’ but then you suffer as an artist. That was a decision I had to make myself by taking on the name Kong. I didn’t even choose that name, it was given to me. I had to sit down and have my own reflection – do I take this name or not? The reason I did was to remind me that this is an issue that every artist of color faces at one time or another. And to remind myself not to lose myself, and keep my eye on the ball, and to remember that I have a responsibility to my people when I represent them out there.”

I imagine getting to work with brilliant women like Jenji Kohan, as an executive producer, and Liz Flahive and Carly Mensch who have experience building strong female characters in shows like ‘Weeds’, ‘Orange is the New Black’ and ‘Homeland’. I imagine it was easier to step into the show knowing so many incredible women were behind the project.

“It really is. We didn’t get the scripts weekly. You guys are lucky. You get everything, the whole season at once. You don’t have to wait. But us, we get the scripts doled out to us every other week or so. We have to wait to find out what happens in the next episode. So there were some episodes where it was like, okay where is this going? However, I had complete faith that it was going to some place that I knew was right. I had complete faith in all the women involved, and in charge, that they were writing in a place that was going to be a safe place, and somewhere we needed to go, with stories we needed to tell. And I was totally right. I was totally right to trust them.”

What was your reaction when you actually read the script for the episode?

“When I say, ‘Mouth open, jaw dropped’ – the whole time reading it, my mouth was open and my jaw was dropped. Everybody knew that they were doing a departure episode, where only 10% of the cast was going to be in. When I heard that I automatically assumed that I wasn’t going to be in it. I made that assumption so big that I planned a trip with my husband. I was like, ‘Let’s go on a Santa Barbara trip because I’ve got the week off because I’m not gonna be in one of these episodes’. Then I got the script and read it.”

We gotta talk about AEW a little bit. Take me back to Las Vegas and Double or Nothing when you made your debut. Putting me the journalist aside for a second, Mike the wrestling fan of 22-23 years, I jumped out of my seat at that moment. It was captivating, actually.

“It was so surreal and surprising. I’m backstage and I hadn’t slipped on the Kong psyche. She is a real psyche. She’s a whole space in my head that I have to get into. I hadn’t put her on in over three years and I’m trying to get into it. I got a nice pep talk from Diamond Dallas Page, which was nice, but I was still worried. Especially since I had new music, and in the past when I got to this point and I still wasn’t in the Kong head space, I would always depend on my music to get me there. This was new, and I’d heard it once but never in this setting before. I was very nervous that I would just get out there and it would be me, Kia Stevens, with my goofy self, just skipping down the ring in my Kong gear or whatever.

And then hearing this massive pop that literally shook the building. I’m in L.A. and we experienced those earthquakes a few weeks back, but it wasn’t so dissimilar to what I experienced in Vegas. It shook so bad my legs turned to jelly and I was like, ‘Oh my gosh they actually remember me!’ I really did want to skip down the aisles! That was awesome. Hearing people’s reactions afterwards was awesome, because it really is hard to pop you guys. The wresting community – it’s so hard to get you guys.

We just did our TCA the day before yesterday, and while we were there and we’re all together, we’re brainstorming and what not. Watching them brainstorm on how to pop you guys is so exciting. In order to be a wrestler you have to be a wrestling fan, so imagine the most super wrestling fans getting together and trying to figure out how we’re going to get you guys to get out of your seats again. That’s what we’re doing over there at AEW and I hope that energy never fades.”

I don’t know if you watched it back, but it shook the hardcam when you came out. I guess that’s what you’re looking for!

“Yes! Especially for you guys. I love that we have that moment in wrestling. As a wrestling fan myself, I love that we had a moment like that. We don’t get that many moments, because we’ve almost seen it all. Almost. Not quite, because in AEW we’ve got some tricks up our sleeves.”

Being a part of this wrestling show that not only talks-the-talks, but actually lives it out and leads by example when it comes to diversity of all kinds – not just race, but gender and sexual orientation. How important was that for you in making your decision to wrestling in AEW?

“You know, I’ve been in basically every company there is out there. When I leave every company I’m like, ‘Gosh that company would have been perfect is this,’ or ‘That company would have been perfect if they had done that’. Watching them at AEW, they are spouting the same stuff that I have written in my diary. The ‘What Ifs’ and the ‘If Onlys’. They’re talking that same line, and they want to do that same line. I’m all about being at the beginning of that. Are you kidding me? I think it’s historic. I think it’s about time. And they genuinely, we genuinely want to give you guys moments like that where you’re up out of your seat. Moments that you’ve been talking about for years. We want to give you that.”

So what can fans expect from you in GLOW season three?

“You can actually expect something that I deal with everyday. We get into a little about the wear-and-tear that wrestling puts on your body.”