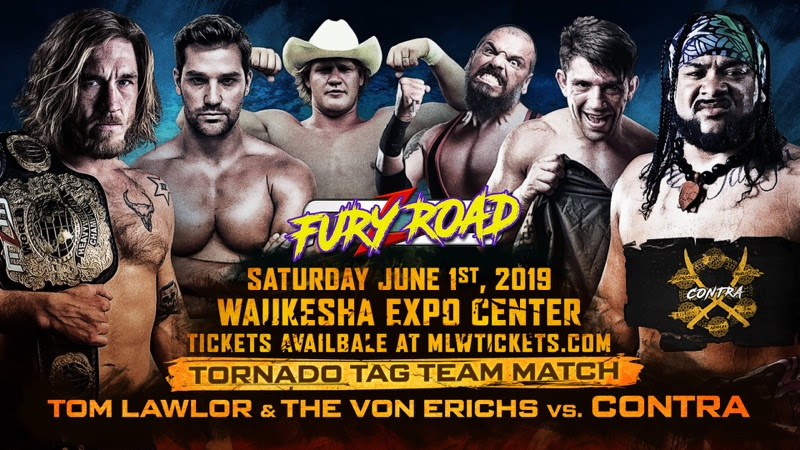 How do you counter three hostile outsiders possessing a 300 pound Samoan, a megalomaniac and a sinister scientific grappler? “Filthy” Tom Lawlor’s answer to CONTRA Unit is simple: call Ross and Marshall Von Erich.

Tickets start at just $10 at http://www.MLWTickets.com.

For weeks there’s been speculation as to who Lawlor would recruit to go into war against three of the most unpredictable, dangerous and dominant force MLW has possibly ever scene.

What wrestlers would be brave enough and tough enough to rise up against the self-proclaimed “global dealers in violence”?

Calling the Von Erich ranch on Kauai, Hawaii, Lawlor got a quick “yes” from the newly signed brothers. Lawlor notes banding together with Ross and Marshall Von Erich enables the World Champion to have his own wild card going into a guaranteed wild encounter.

While newcomers to Major League Wrestling, Ross and Marshall Von Erich are no strangers to Japan having toured with Pro Wrestling NOAH.  The brothers have also dominated the competition in Israel as well as winning gold on the Texas and Hawaiian circuits respectively.

Recruiting a 6’4″ 250 pound cowboy that can hit a moonsault and his muscular master strategist brother gives Lawlor an impressive counter to the chaos that CONTRA is known to conjure.

Now the six wrestlers will enter the battlefield on June 1st in a tornado tag team match where the combatants are allowed to be in the ring at the same time and anyone can go down to defeat at any given time.

Will Lawlor and the debuting Von Erichs be the first to bring the fight to CONTRA Unit? Will CONTRA Unit continue to disrupt and destroy?  Find out LIVE on June 1st in Waukesha in the greater Milwaukee area. (buy tickets)

Media and business inquiries for this event can be sent to: [email protected]

Matches and more wrestlers will be announced at MLW.com.

Tickets start at $10 at MLWtickets.com.  Tickets will also be available day of show at the box office unless the event sales out in advance.

DRIVING DIRECTIONS:
The Waukesha County Expo Center is located a short 20 minutes from downtown Milwaukee with easy access from I-94. Take I-94 exit #294 (Highway J) south to Northview Road (Highway FT), turn right on Northview Road to the Expo entrance.

MLW is the parent company of the MLW Radio Network, the leading provider of professional wrestling podcasts in the world with 5-6 podcasts in the top iTunes 100 in the sports category on the average day.  MLW content has been distributed commercially in in the United Kingdom, Japan, Germany, India, Denmark and Bangladesh among other territories.