The following press release has been issued: 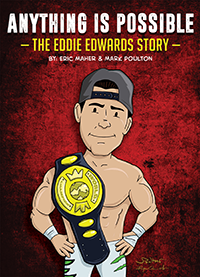 New York, NY, September 27, 2018 –  With as much impact as his signature move, the Boston Knee Party, “Anything Is Possible: The Eddie Edwards Story” takes fans of all ages inside the ring for an inspiring look into world champion wrestler Eric Maher, aka Impact Wrestling’s Eddie Edwards’ journey to the top of the independent wrestling scene. Maher teams up with co-writer and DC Comics artist Mark Poulton to deliver highlights from his incredible career. The only man in history to win the Impact Wrestling, Ring of Honor, and GHC World Heavyweight Championships—professional wrestling’s triple crown, Maher recounts his days as a kid dreaming of a wrestling career, to training with the legendary Killer Kowalski, to living and training in a Japanese dojo in the footsteps of his heroes.

The world is full of underdogs, but as “Die Hard” Eddie Edwards, Eric Maher proves that with hard work and determination his mantra of “Anything Is Possible” can be true for anyone.

The book will be released on October 2nd, and can be pre-ordered at this link.