Indie wrestler Jordynne Grace, who you may know from Beyond Wrestling, Women’s Wrestling Revolution or SHINE, started a lively debate on Twitter this weekend arguing in favor of professional wrestling being referred to as a “performance art” rather than a legitimate “sport”.

Grace went back and forth with numerous fans on Saturday. Part of her argument is that “the insistence upon calling it a sport has really brainwashed some wrestlers into believing they are really in competition with one another while in the ring,”  later stating that not all wrestlers can be considered athletes because, “some people I’ve wrestled are the laziest, clumsiest people in the world.”

One of the more interesting ideas that was brought up in the discussion was implementing other forms of entertainment alongside the actual in-ring product at live wrestling shows. Obviously we’ve seen a small version of this with musical performances at major WWE events, and at the Lucha Underground live tapings. You could also make the case that the entire wrestling industry was built around a sideshow act that travelled with carnivals and circuses.

The debate over “art” vs. “sport” picked up so much steam that former UFC Heavyweight Champion and long-time wrestler Josh Barnett joined the discussion. Josh argued that “without sport you have zero framework for wrestling”, and claimed that people want to consider it an art form because “there are barely any legitimate wrestlers” left in the business, “and barely any legitimate wrestles training people.”

So what do you think? Should pro wrestling be considered a legitimate sport, or is it healthier for the industry overall to rebrand itself as true performance art? Sound off in the comments section below or hit us up on Twitter @PW_DotCom.

I am 100% for calling wrestling a “performance art” rather than a “sport”. The insistence upon calling it a sport is really holding wrestling back in my opinion. Discuss with me.

I can’t think of anything else “sports entertainment” applies to besides wrestling. Therefore, sports entertainment IS wrestling…but of those two categories I mentioned, wrestling would fall into a performing art. It’s theater competition. https://t.co/sxpb0XkPeH

Yeah, the insistence upon calling it a sport has really brainwashed some wrestlers into believing they are really in competition with one another while in the ring. It’s out of hand in some areas. https://t.co/ZTICyscWnw

Why does wrestling need to be taken so seriously? Wrestling should be entertaining, whether it’s supposed to be funny or competitive. We all have different stories to tell and different acts to perform. https://t.co/mBxG6p7dbJ

That’s backwards to me. Less people want to watch wrestling than want to see an action film. Wrestling isn’t a sport. We need to cater to people who aren’t wrestling fans and stop masquerading wrestling as something it’s clearly not. It’s a show, not a sporting event. https://t.co/R1q6t6iHvp

I also don’t want to disrespect anyone, but i’ll go on record to say some wrestlers are NOT athletes. Some people I’ve wrestled are the laziest, clumsiest people in the world. https://t.co/a9PKKuU0I6

Getting people to believe it’s real while performing. That is LITERALLY what theatre does though. https://t.co/l4SrTzWvRB

But it also doesn’t address the fact that without sport you have zero framework for wrestling – which even still, is a display if combat between opponents of which one overcomes a struggle against.

If yiu erode the sport of wrestling away enough it becomes cheap improve. 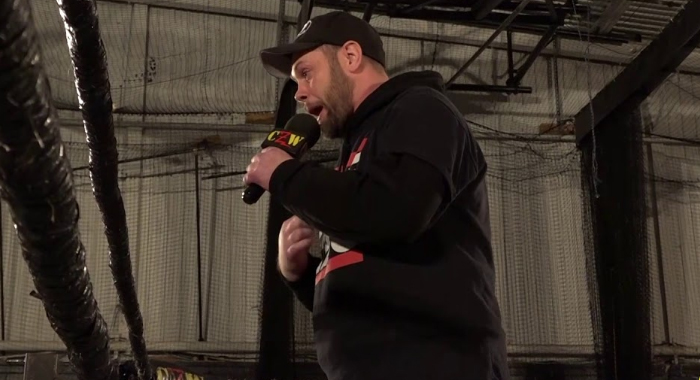 Indie wrestling veteran Jimmy Rave, best known for his time in Ring of Honor and TNA Wrestling, announced today that an unexpected amputation has forced the end of his 20-year-plus professional wrestling career.

Rave, 37, announced on Twitter this weekend that he had been gritting through an issue with his left arm. By the time he went in to see a doctor, an infection was found that was serious enough to require amputation above the elbow.

“I have been very blessed for the last 21 years in professional wrestling and getting to live out my dream. Today, that dream has ended for me,” Rave wrote on Saturday night.

“I appreciate everyone who has supported me or anyone who has pegged me with a roll of toilet paper. To my brothers & sisters I have shared the ring with or a locker room; thank you for always pushing me to be better. Thank you to all my mentors and my students who allow me to still feel needed. This was the hardest thing I have ever had to type.”

Jimmy Rave got his start working in the Georgia independent scene at the start of the 2000s, a mainstay of NWA Wildside. He worked extensively for Ring of Honor from 2004 to 2007 and was later one half of The Rock ‘n Rave Infection in TNA (later IMPACT) alongside Lance Archer.

This is the hardest tweet I have ever had put out. pic.twitter.com/G9kr8oq7ra

STF Underground Ep. 86 – Has NXT Been Better Than AEW? Undertaker’s Farewell, Should Omega vs. Moxley Be On PPV? 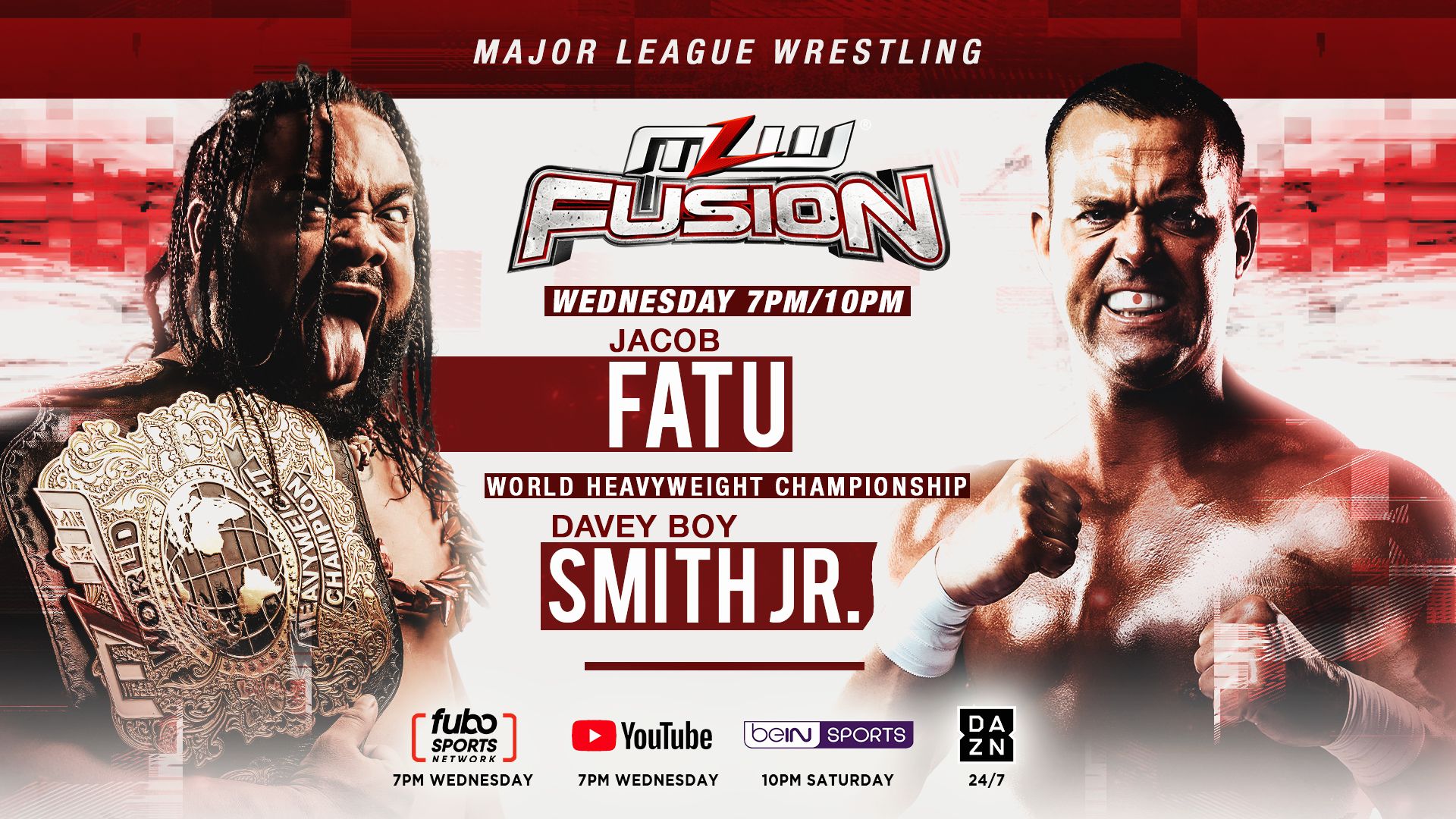 The Restart is finally here! After an eight month hiatus, Major League Wrestling returns tonight with their first all new episode of MLW Fusion since the onset of the COVID-19 pandemic. HERE IS A LIST of all the different ways you can watch MLW each week.

The cold open recapped the entire saga of CONTRA Unit from its inception to where we are today. Tonight all three singles titles are on the line, headlined by Jacob Fatu defending the MLW World Heavyweight Championship against Davey Boy Smith Jr.

Dugan charges in and gets wasted with a shoulder tackle. Hammerstone hits the Nightmare Pendulum and scores the easiest win of his life in about 15 seconds. After the match, Hammerstone gets on the mic and calls out Jacob Fatu, asking how long the heavyweight champion is going to avoid him.

Next up, Myron Reed defends the MLW World Middleweight Championship. Brian Pillman Jr.’s music hits, but nobody comes out. His music hits and again, no one comes out. The announcers tell us we’re going to take a short break as the challenger has refused to come out to the ring.

Back from break and Pillman has finally decided to grace us with his presence. He drops the champion with a quick shoulder tackle and throws wild rights and lefts as soon as the bell rings. Pillman throws a kick on the apron and the two brawl around ringside. Reed starts to fire back with kicks and uppercuts, heading back into the ring to deliver a beautiful suicide dive. He tries for a second one, but Pillman sees it coming and catches him with a knee on the apron.

Pillman slows things down for a beat in the ring, working holds and slapping on a body stretch. Reed catches him with a schoolboy pin for two, but the challenger reverses into a modified surfboard stretch, using Myron’s chest protector for a bit of extra leverage. The ref doesn’t like that and makes BP break the hold, which sort of begs the question why Myron is allowed to wear it in the first place.

Reed springboards in with a flying crossbody for two. Pillman fires back with hard knife-edge chops. He manages to rip the chest protector off his opponent and continues with chops, taking advantage. Both guys hit the ropes and collide in the center with crossbodies. Both men down.

Reed kips up and hits a big boot. Clothesline. Step-up enzuigiri. Knee lift. He heads to the apron and connects with a springboard legdrop for two. Pillman catches him with a backslide pin for a nearfall and sets in with a series of clotheslines. Big spinebuster for two. Pillman slowly climbs to the top rope and hits a diving crossbody, but it’s still not enough to get the job done.

Reed battles back and drops the challenger with a springboard cutter and a modified Sliced Bread for another nearfall. Pillman gives him a nasty knife-edge across the back of his neck and hits a Falcon Arrow for two. Reed gets his knees up to block a corner splash and hits Captain Crunch! 1-2-3.

Myron reminds everyone to stop sleeping on the “Young GOAT” before calling out Lio Rush. He knows the former WWE star is here in MLW to wrestle and he’s ready to put the title on the line.

The brackets for the 2020 Opera Cup have been revealed! On the left side we have “Filthy” Tom Lawlor taking on New Japan’s Rocky Romero, and the high-flying AAA World Cruiserweight Champion Laredo Kid up against ACH! On the left side of the tournament it’s Low Ki vs. Davey Boy Smith Jr. in what should be a deeply physical first round match, while Richard Holliday takes on TJP.

The two heavyweights lock up in the center of the ring, and Smith takes control with a headlock. Fatu sends him into the ropes and tries to take him down with one, two, three big shoulder tackles, but Smith barely budges. The champion almost looks impressed. He hits the ropes for number four, but Smith surprises him with a snap powerslam for an early two-count.

Fatu fires back with a headbutt, but Smith sends one right back. Smith refuses to go down and headbutts the champion like ten times in a row, and they both collapse. Both guys take a minute to recover and Fatu whips the challenger hard into the corner, flaring up a pre-existing back issue that may pose a problem for Smith here. Fatu immediately follows with a scoop slam.

Both guys went in hard, to the point where they’re both completely exhausted at the seven-minute mark. Fatu tries for a springboard moonsault but Smith gets the knees up and begins to rally with strong right hands and chops in the corner. Big Saito suplex for two. Smith hits the ropes but runs into a sidewalk slam from the champion.

Fatu heads to the second rope but the challenger cuts him off with an uppercut. Smith tries for a piledriver but his back gives out and Fatu is able to hit a Samoan Drop. He quickly climbs to the top rope, connects with a moonsault, and gets the win.

Fatu asks MLW management if “that’s all you got” and drops a bunch of F-bombs they have to censor. He calls out Alexander Hammerstone and talks a ton of trash, claiming he’s not scared of the National Openweight Champion’s threats.

Hammerstone’s music hits and he makes his way to the stage, but a big muscular man in a mask comes from behind and rocks him with a steel chair. Fatu and the masked man beat down Hammerstone and pose together to end the show. CONTRA strikes again.