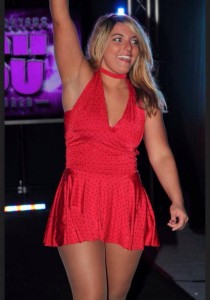 Pro Wrestling Smark Talk had the opportunity to speak with Jenny Rose prior to the Ring of Honor 12th Anniversary Event in Philadelphia, Pennsylvania. We briefly discuss the early stages of her professional wrestling career, discuss Japan, Alpha Female and WSU Wrestling.

1). What inspired you to get involved in the wrestling industry?

Jenny Rose: “I was about 7 years old when I first came across professional wrestling. My entire family gather around the TV whenever wrestling was on. I wanted to fight and be the one competitor, fans will cheer fir every time. I love it! As I got older I started looking into professional wrestling schools around Philadelphia”.

2). Describe your experience being a trained at the Ring of Honor Wrestling Academy and how it lead you to competing for Shimmer?

3). What was the inspiration behind the Jamilia Craft Character?

Jenny Rose: “It’s simple, Jamilia Craft was different. My trainer’s came up with the gear inspired by Kyoko Inouse. I decided to wear a mask as a tribute to my trainer Delirious. I was always about creativity and wanted to separate myself from everyone else”.

Jenny Rose: “WOW those matches feel like forever ago! A stand out match was against Mercedes Martinez; she’s an amazing wrestler and I’ll never forget how well she treated me”.

5). Why change your name from Jamilia Craft to Jenny Rose; also what’s the difference between the two characters?

Jenny Rose: “I got signed to Pro Wrestling Diana in Japan after almost 2 years of wrestling in America. They had a different image for me and it was time to move on. My spirit is still the same”.

6). Jenny, you went over to Japan and competed for the Diana Promotion was it difficult converting from American Style to Japanese Style?

Jenny Rose: “Absolutely everything about Japan was challenging for me. The culture, training, and matches. Before Japan I was more fixed on being a technical wrestler. I learned very quickly that I had to fight harder against the veterans and desperate young girls. I learned and worked my way from very bottom in Japan where I learned their style”.

7). Jenny are the fans different in Japan compare to the United States?

Jenny Rose: “Japanese fans are very different than American fans. In Japan, they are silent and reserved. In the United States we show our feelings. This is how I would describe our cultures as well. I really love and enjoy competing in Japan”.

8).Describe your most memorable feud and match from the Diana Promotion in Japan?

Jenny Rose: “I had many memorable matches in Diana, but my most honorable match was at Diana’s 2 Year Anniversary Show; the Semi Main Event at Kawasaki Arena it was Manami Toyota and myself vs Mima Shimoda and Takako Inoue. I made my entrance last holding a Diana Promotion Flag and the match was name after me. I couldn’t believe the level of respect they have shown that night. They reorganized how hard I worked and it paid off; it was such a dream come true”.

9). Which female competitor(s) from Diana Promotion if came over to the United States would become a huge superstar?

Jenny Rose: “All of them, they’re real stars and will blow everyone’s minds away”.

10). Jenny you competed for promotions such as WSU Wrestling, AIW, and WXW which of these promotions are the toughest in terms of locker room and crowd reaction?

Jenny Rose: “I consider all three of them a challenge. I focus more on my matches and competing the best I can to walk away with the win”.

Jenny Rose: “Very tough match. We never had an opportunity to wrestle against each other in Japan since we work for two different wrestling promotions. I was looking forward to a new challenge, I hope to compete against her again someday MINUS getting thrown into a wall”!!

12). Jenny what was your overall impressions of Hania Huntress at WSU Mutiny?

Jenny Rose: “I think she’s very athletic and has a lot of potential. She’s deserves a rematch that’s for sure”.

13). Which match at WSU Mutiny completely blow your mind?

The following feature articles upcoming: The Art of Refereeing in Professional Wrestling with Beyond Wrestling Referee Kevin Quinn. Pro Wrestling Smark Talk can be reach via social media: www.facebook.com/prowrestlingsmarktalk and www.twitter.com/pwsmarktalk.

Pro Wrestling Smark Talk is a proud affiliate of TShirt Bordello, please go to www.prowrestlingsmarktalk.blogspot.com and click on the TShirt Bordello Web Banner to check all the different Zombie Tees, also $10 Tees are available.