WWE Hall of Famer Jim Ross recently joined Submission Radio to share his thoughts on MMA fighters crossing over to WWE. Below are some interview highlights, along with the full interview in the video player above.
Speaking about McGregor possibly coming to the WWE, Ross explained why he’s on Vince McMahon’s radar:
“Oh yeah, Vince knows who Conor McGregor is. You know, Vince doesn’t live on Uranus. He’s pretty well read, he pays attention, he pays attention. And Paul Levesque (Triple H) certainly knows who Conor McGregor is. Look, I don’t have this concrete information or source telling me all that good stuff, I would be very surprised if the two parties on some level haven’t had some kind of communication. It may be lawyer to lawyer, probably that more than anything, but just to feel out interest. Conor is another global star and Conor will sell wrestling tickets, because for a one-off, for a one-time deal he’ll sell tickets to see how he’s going to do. And he strikes me as the kind of guy that has such a competitive ego that he will do anything to not fail, to not look bad. And I cross off the attraction exhibition match he had with Floyd Mayweather. You know, they both got rich, richer. Good for them, I’m happy, but it wasn’t, it didn’t do any wonders for any one of their careers or in boxing. Their bankers loved it, and that’s all that matters. But I think Conor would be a major hit there because, a) he can talk, and that’s half the battle. And again, he’s competitive so he wouldn’t want to embarrass himself. So I think somewhere down the road if the stars align, that’s another guy that would be (a perfect fit for the WWE).”
With other WWE wrestler frustrated by McGregor’s trash talk, Ross explained why times have changed from the Roddy Piper day’s and there would be no issues for McGregor in the locker room:
“Different generation, different time. The thing about the theory that you mentioned there of Conor coming in and making a big payday and leaving, well, while he’s getting to that payday and at that payday he’s generating revenue for the company, and the talent share in the revenues on the discretionary payroll. So, all Conor is gonna do is cook bigger pies for the wrestlers to get a bigger slice. And they’re like some of the guys on social media are like a lot of fans, fellas, they’re keyboard warriors. They’re brave as hell when they’re on their little keypad and they’ll say anything they want to say because they’re safe, they’re protected, but when Conor’s around I gotta believe that they would grab it. How many selfies are they gonna be taking with Conor in the locker room if he came in? He’d be deloused. So I don’t look at that, no issue whatsoever. And you know, Roddy (Piper) was a different spirit. There’s no Roddy Pipers in these dressing rooms, let’s put it that way. And I don’t mean that negatively at all, Roddy was an amazing, he was a wild west survivor and he grew up hard and he was a different cat than some of the kids now. You know, Roddy, probably like me, he had a hard time turning on a computer much less using one. Roddy was a man’s man and had a lot of pride, and that’s just how he was broken in the business. So I don’t think it would be an issue whatsoever. If I were talents, I would be ecstatic, because you know that when Conor McGregor would appear on Monday Night Raw the ratings will be skyrocketing. What’s he gonna do? What’s next? Could you believe what they did? And you could do that for several weeks of episodic booking that would lead to the crescendo, the Wrestlemania match, whatever it might be. So I see nothing but winners in that scenario.” 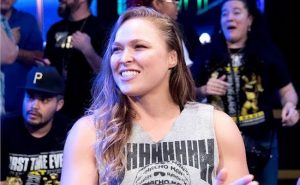 With Rousey rumored to make her WWE return, Ross doesn’t agree with critics who think the move is too late as her legacy has taken a beating after losing two fights in a row: