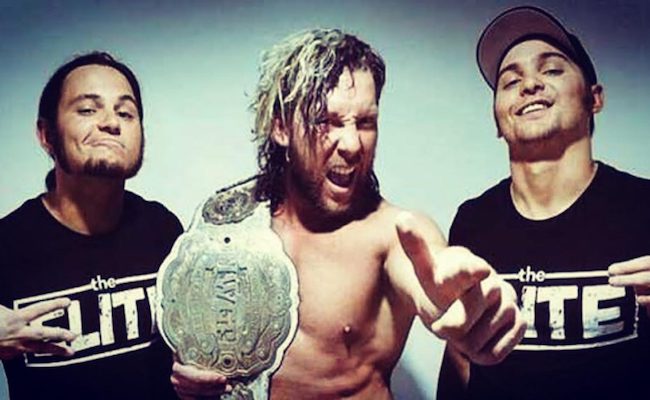 Kenny Omega & The Young Bucks Comment on “Being The ELITE”, Life on the Road

The three members of The Elite appeared on an episode of Colt Cabana’s podcast “Art Of Wrestling”(AOW) Thursday to talk about their wildly popular YouTube show Being the Elite and Colt’s new Children’s Book, entitled “Wrestling Dreams“. Being The Elite debuted in May of 2016, and the trio comment on how it started as Vine clips, and has greatly evolved since then.

On spending money for the show, upgrading equipment:

“We feel like we should put money into the show….we’re perfectionists, much like we are in the ring. We care about our quality, we care a lot about the product we put out. And sometimes we have to make sacrifices for the sake of that quality, whether it’s sacrificing possibly our health, possibly our time, possibly our sanity, sometimes our money. But it’s something we’re willing to do for the sake of what put out to the public and the people. It’s our art.”

They also commented on how they don’t have to put too much thought into wrestling anymore and they take more time into film making/making their show. The team gets a “big high” when posting the show, more than after a wrestling match. They described that there is a feeling of accomplishment, especially not knowing how it’s going to be received, especially because what they think is funny is not necessarily going to be funny to other people.

Kenny Omega, on how he is separated when he’s in Japan and the Young Bucks are Traveling:

“I felt like I was sent on a learning excursion away from the show and I had felt like just sad and lonely and apart from the group because these guys had come up with such good content that I was not a part of and people were wondering ‘where am I for the invasion, where am I for the Flip Gordon Stuff?” And it’s like, of course I want to be there, but all I can do is either my real life stuff when I’m on tour or I can aid with like a phone conversation here and there, but I can’t physically be in the seats.”

They also talked about vlogging on the road, but people also saying how the episodes are repetitive, and how it challenged them to be creative and come up with new ideas and new content. They realized that people were enjoying short clips but they are still trying to come up with new ideas and going back to vlogging/storylines. It is essentially a journal about their lives.

They also spoke about Kenny being late to the game with Twitter and having T-Shirts, having a lot of self doubt even as to question “Do you think people will buy my shirts?” Colt remarks about the plethora of shirts being sold at Pro Wrestling Tee’s for all the Bullet Club members.

“We can’t control who joins “The Club”. We have influence, but Gedo’s got final say in all of that. It’s a New Japan thing.”

“If you really want to know what is a brainchild of us, that’s Being The Elite”

Kenny Omega spoke also reflected on his matches with Okada, and how his “critically acclaimed” matches were able to help out the entire group. Colt commented about how Omega’s return to the United States received an overwhelming ovation and they commented that since we live in a digital age, wrestling fans have really turned around and have supported them and support more than just is pushed on them.

They later transitioned into getting heat from those same online people, and the more popular they get, they also receive more and more heat and how they sometimes deliberately post things on social media just to get heat, burring the lines of their characters versus their real life personalities in order to keep fans guessing.

Kenny Omega also made a very controversial statement regarding WWE and their talent how they have “the machine” behind them, while they are self made and did it from the ground up.

They later discussed their plans for their show, and how in 2018, they have plans for something that will be a “game changer” which we now know was the recently announced match between Kenny Omega and Chris Jericho.

You can listen to the entire interview here, or click on the player below: