On Saturday, April 6th the stars of Ring of Honor Wrestling will participate in perhaps the single most important event in the 17-year history of the promotion, teaming with New Japan Pro-Wrestling to perform in front of a sold-out crowd at Madison Square Garden.

For Matt Taven, who will step into the ring next weekend to compete in a ladder match for the ROH World Championship, this opportunity is a dream come true. The 34-year-old star grew up an east coast kid obsessed with two things — professional wrestling and basketball — and is intimately familiar with the world’s most famous arena.

I had a chance to catch up with Mr. Taven, the self-proclaimed “real world champion” and leader of a faction of wrestlers known as The Kingdom, ahead of what very well could be his crowning moment more than a decade in the making. A complete transcription of our conversation is below. 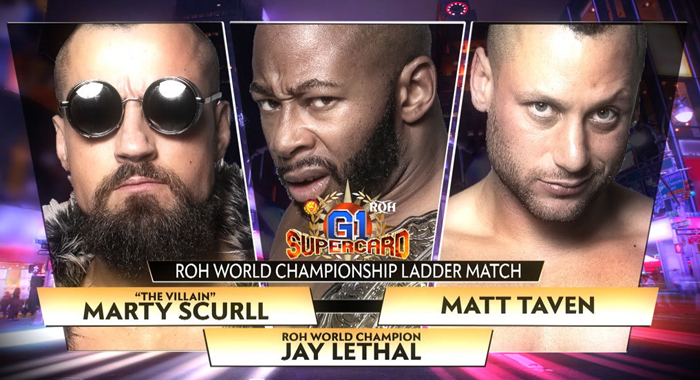 KILLAM: SO, HOW ARE YOU FEELING GOING INTO NEXT WEEKEND’S SHOW?

“Obviously I’ve wanted this opportunity and spot, and being a lifelong wrestling fan there’s no better place for it to happen. There’s been other things in my career that I thought were big bucket list items. The anniversary show at a sold-out Arena Mexico this past year was definitely one of them. Madison Square Garden is next on the list, and now that I’m part of the main event, check it off twice.”

“I’m pretty excited. It’s one of those things were you can’t let the moment engulf you. You gotta really enjoy it, because you never know when it might happen again. I’m not really even that nervous. I’m more giddy-excited, with a smile on my face. I just want it to happen. There’s a lot of talk and anticipation and build, but I’m ready to go right now.”

I IMAGINE, GROWING UP A WRESTLING FAN, YOU HAVE SOME CLASSIC MOMENTS FROM THE GARDEN THAT STAND OUT IN YOUR MEMORY?

“There’s some that pop in my head instantly from wrestling and non-wrestling stuff. I was a kid who barely knew what was going on in 1991, but I can remember begging my parents to order SummerSlam. I remember watching it and Bret Hart won the Intercontinental title in Madison Square Garden over Mr. Perfect, and it kind of sealed my fandom as a Bret Hart guy from there on out. The end of WrestleMania X when Bret is holding up the world title — I’m pretty sure I replayed that moment in my living room a million times, setting up my parents couches like a ring and holding up whatever replica belt I had at that time.”

“I’m a giant basketball fan, and watching all the historic games between the Bulls and Knicks at Madison Square Garden. Obviously the New York and Boston rivalry in general. Any time the Celtics are down there, you’re always looking up at that roof and seeing that lighting at MSG.”

I GREW UP IN CHICAGO SO I’M VERY FAMILIAR WITH THOSE BULLS GAMES, AND WATCHING MICHAEL JORDAN AT THE GARDEN.

“It’s definitely got a fond place in my heart, and is somewhere that I’ve always wanted to be. Just to go to Madison Square Garden is special, and here I am going for the Ring of Honor world title.”

TO HEADLINE THE GARDEN WITH SOMEONE LIKE JAY LETHAL, WHO YOU’VE SPENT A CAREER WRESTLING AGAINST, AS WELL AS MARTY SCURLL… 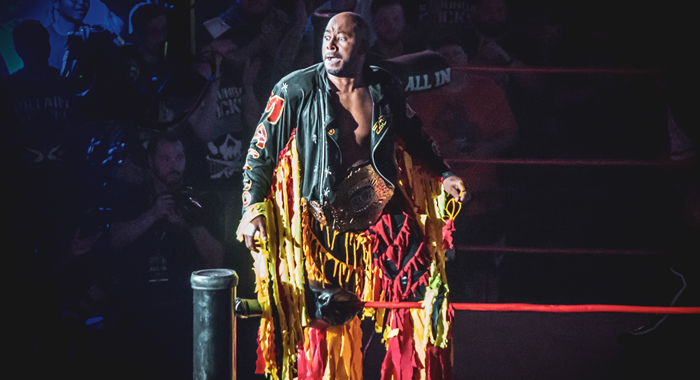 [LAUGHS] FAIR ENOUGH. BUT LETHAL IS DEFINITELY SOMEONE YOU’VE BECOME FAMILIAR WITH OVER THE YEARS, I WOULD IMAGINE.

“It’s kind of one of those things that just happens, and then all the sudden you look back and it’s — everywhere I turn there’s Jay Lethal. We’ve fought for the television title. We’ve had Truth Martini be my manager and his manager. We’ve fought in steel cages. We’ve gone to 60-minute time limits. Now we’re going to be in a ladder match for the Ring of Honor World Championship in their biggest show.”

“There’s these rivalries that you always think about in wrestling, and now I feel like I’m in one of them. I’m not a fool to think that Jay Lethal isn’t one of the best wrestlers on the planet. He brings out the best in me at all times. I’m not going to take away his in-ring ability. We have battled back and forth, and we have mutual respect for one another because we’ve been through such crazy battles. There’s no better place for it to come to a head than Madison Square Garden.”

“And then there’s Marty thrown in there as the third wheel [LAUGHS].”

YOU MENTIONED YOUR RECENT 60-MINUTE DRAW WITH LETHAL. HOW DO YOU EVEN PREPARE FOR SOMETHING LIKE THAT? WHAT GOES THROUGH YOUR MIND WHEN THEY COME TO YOU AND SAY, “WE NEED YOU TO GO THE DISTANCE TONIGHT.”

“You never know how it’s going to go. You run through a million things that might happen or go wrong, but until you’re out there you don’t know how it’s going to play out. You find yourself in this athletic competition where you know you’re feeling tired at like the 35-minute mark, and you start to feel the wear and tear. But by the time you hit 50 minutes you start to get an energy spike. At the end of it, my knee was barking, but the adrenaline was running so hard I could have gone another 30, or another hour. I could have gone forever.”

“You hit this point where you’re in it, and you’re fighting to the death. When you’re in there with someone like Jay Lethal, your natural instinct sort of rises to the occasion. Afterwards I was so stoked, and I felt like I could have ran through a wall at that point, but when I crashed that night I crashed hard. I passed out. But when that adrenaline was kicking in, you feel superhuman.”

“There’s a part in that match that I dive outside of the ring at 55 minutes or so, and it just felt like I was 25 again. You train for those moments, and I’m always kind of ready for that situation. I’ve been training hard and I guess it paid off, because when that bell rang for 60 minutes I didn’t feel like that war was over.”

YOU KEPT THE FANS’ ENGAGED, WHICH IS THE MOST IMPORTANT FACTOR. WHEN IT WAS OVER THEY WERE EVEN CHANTING FOR “FIVE MORE MINUTES”.

“Honestly, it’s a good feeling. For all the times that I’ve insulted these people right to their faces, to hear the Matt Taven support in there mixed with the Jay Lethal support, it does something to your psyche. It picks you up and lets you keep going. That Vegas crowd brought us to another level, and I expect the same thing at MSG.”

I WANT TO CHANGE GEARS FOR A SECOND AND TALK ABOUT THE KINGDOM. I’VE BEEN A BIG SUPPORTER OF MIKE BENNETT FOR A LONG TIME NOW… 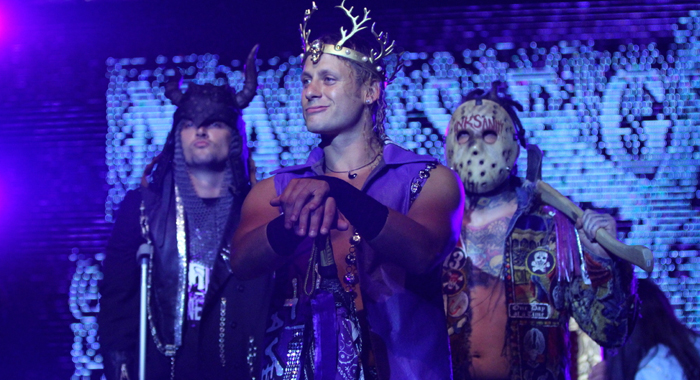 THE KINGDOM HAS BEEN THROUGH SO MANY CHANGES. YOU STARTED OUT AS ONE OF THE YOUNGER GUYS UNDER MATT HARDY AND ADAM COLE, THEN CAME YOU AND BENNETT AS A TAG TEAM, WINNING GOLD IN RING OF HONOR AND NJPW. NOW YOU’RE THE LEADER AND THEY’RE OFF DOING THEIR OWN THING…

“The reason there still is a Kingdom is because it’s the same feeling as the original incarnation. These are real friends that really hang out with each other, that really have each other’s backs. We’ll really go to war for each other. It’s not just a t-shirt selling ploy. It’s not a way to get each other over. These are my brothers, and the people I see on a daily basis and basically live my life with. It’s been that way since I joined the Kingdom in the first place.”

SO YOU WERE ALREADY CLOSE WITH THEM WHEN YOU CAME IN?

“Me and Mike Bennett came up together in the same school under Spike Dudley, and had been riding together for years. Me and Adam Cole had become pretty close friends, as we kind of started at the same time on the indies. We were all riding together, hanging out all the time, and it just made sense to make it a thing. That’s the natural flow that happened from one incarnation to the next. Real-life friends that have each other’s backs, and it comes across that way on screen.”

“Through it all — through going to New Japan with Mike, to tearing my ACL, having complete reconstruction surgery on my knee, coming back, having Vinny and TK by my side and all the things we have accomplished as a team — we’ve always looked out for each other. Me and Mike are still very close friends, and me and Adam still talk. It’s a bond that will last a lifetime, and that’s why it works in the first place.”

IS THERE ANYBODY OUT THERE THAT YOU WISH COULD BE IN THE KINGDOM, IF YOU HAD TO ADD A FOURTH MAN TO THE TEAM?

“Eddie Edwards was always close in our group. There was this little group of me, Roderick Strong, Eddie Edwards and Adam Cole that would always hang out. I had the bond with Mike, while Cole and Roddy were doing their stuff together. That’s why it worked, because it’s real.”

SO MAYBE A FUSION OF THE KINGDOM AND THE UNDISPUTED ERA?

“…I’m not doing that hand signal!”

DO YOU THINK THERE’S STILL ROOM IN THE KINGDOM FOR MIKE BENNETT?

“He’s always in The Kingdom. He never left.”

ALRIGHT MATT, THANKS SO MUCH FOR YOUR TIME. ANYTHING ELSE THESE FANS NEED TO KNOW BEFORE THE BIGGEST MATCH OF YOUR CAREER?

“Jump on the bandwagon now, because it’s going to be completely full after MSG!”

ROH & NJPW present G1 Supercard on Saturday, April 6 from sold-out Madison Square Garden in New York City. The historic event airs LIVE at 7:30e/4:30p on traditional pay-per-view and streaming FREE for all HonorClub members. HonorClub content can be streamed via the ROH and FITE apps and at ROHHonorClub.com.