Meet Katsuya Kitamura. He’s 32-years-old, stands just above six feet tall, and for the last two years he’s been training as a Young Lion in the world-class New Japan Dojo.

Kitamura has been generating a ton of buzz since he started working undercard tag team matches earlier this year. He boasts some incredible strength and an impressive array of powerful maneuvers, but more importantly he looks like the genetic experiment one might end up with if a mad scientist combined the DNA of Brock Lesnar and Dave Bautista. “Big K” is a powerhouse unlike anyone presently on the NJPW roster; like Vince McMahon himself created a character in a WWE video game.

In New Japan, the rookies that hope to one day become main event stars live and train, day and night inside the Dojo. They are put through rigorous exercises and brutal training regiments alongside fellow Young Lions, learning from established veterans and some of the best teachers on the planet. The Dojo is not an easy route to stardom, but its track record boasts legendary names like Jushin Thunder Liger, Keiji Mutoh and Shinya Hashimoto,  as well as today’s “third gen” stars like Togi Makabe, Yuji Nagata, Satoshi Kojima and Hiroyoshi Tenzan. The very best in the world, names like Kazuchika Okada, Hiroshi Tanahashi, Shinsuke Nakamura and Tetsuya Naito, all went through the Dojo. 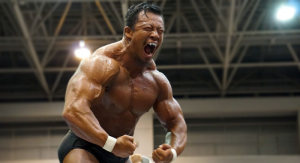 Today, Young Lions have a level of exposure that their idols never had. They work on the undercards of shows seen all over the planet on New Japan World, and even have their very own shows called “Lions Gate Projects” where they are able to perform in rare singles matches against fellow trainees and established names like.

Earlier this year it was announced that New Japan would be bringing back its Young Lions Cup, an infrequent round robin tournament featuring only trainees from the Dojo. There have been 11 incarnations of the Cup dating all the way back to 1985, and has been won by some very notable names including Hirooki Goto, Ryusuke Taguchi, Manabu Nakanishi and even Masahiro Chono!

This past week, Katsuya Kitamura won the 2017 Young Lions Cup after a flawless performance. He finished with a perfect 10 points, over Hirai Kawato (8), Tomoyuki Oka (6), Shota Umino (4), Ren Narita (1) and Tetsuhiro Yagi (1). His monumental win came just weeks after finishing his first ever performance in the NJPW World Tag League, where he teamed with fellow trainee Oka.

After the final match this past Thursday, “Big K” commented on his victory and praised the hard work of his brothers in the tournament. He also stated that he would be going on excursion – a lengthy international learning tour common to most Dojo graduates – and that he specifically wanted to challenge the super heavyweights currently wrestling in America. You can check out the video, featuring English subtitles at the top of this page.

Keep your eyes on the monstrous Kitamura, as he’s likely headed to the United States within the next few months. NJPW has a working relationship with Ring of Honor, where Dojo graduates like Jay White, Sho & Yo (the Tempura Boyz), EVIL (Watanabe), and Hiromu Takahashi (Kamaitachi) have all worked in recent years.