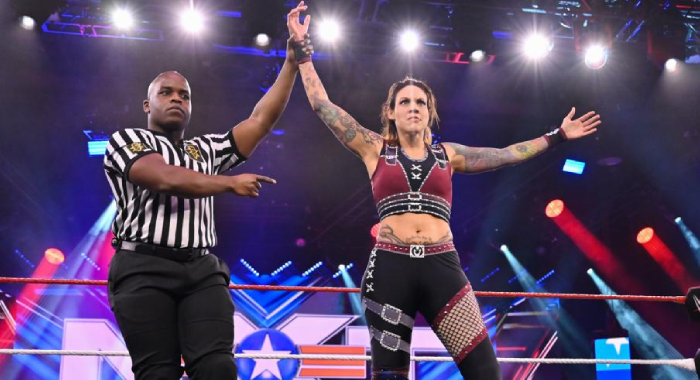 Mercedes Martinez was originally a member of RETRIBUTION, but she ended up leaving the group to return to WWE NXT.

Martinez was part of several segments with the group, appearing on the main roster in her mask. However, she then disappeared, leaving Mia Yim (Reckoning) as the only female member of the group, as Martinez returned to WWE NXT and set her sights on Io Shirai.

During a recent interview with PWInsider.com, Mercedes Martinez revealed why she left the group, admitting that the opportunity just wasn’t her.

“I was given an opportunity, and I took the opportunity not knowing what the outcome would be, you got to make the best with anything you can, but I think when that opportunity came, it just wasn’t for me. When you hit the pinnacle of your career, as I did, hitting 20 years, you want to make the most of your career, and make it part of a legacy…I just think being part of that group, it’s not hidden fact that it was me, I don’t hide the fact, I don’t mention it, only because it was just a small part of what the bigger picture is.

It’s kind of one of those things where it’s, “this is where Mercedes is, but maybe it doesn’t fit the mold, doesn’t fit her career’. It was no hard feelings, I just think we both had two different plans, I wanted one thing to go one way, and they had a different outlook. I wish them success, to all those part of the group, and I wish them the best.”

Martinez competed in the first-ever Women’s Dusty Rhodes Tag Team Classic this week, pairing with Toni Storm. However, they were eliminated in the First Round by Kacy Catanzaro and Kayden Carter.