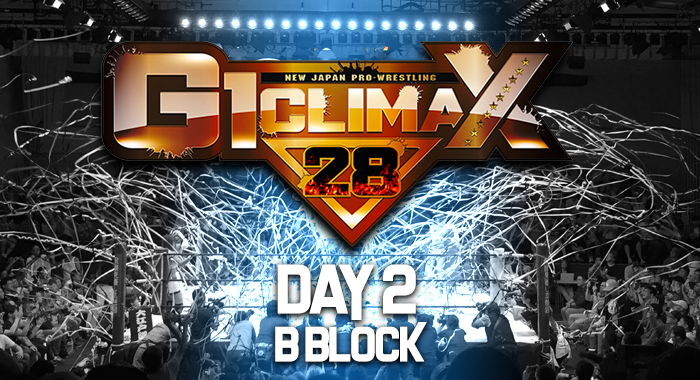 Report by Mike Killam for ProWrestling.com

So this story going into this one is that Ishii and Yano have worked over 450 matches together as a team, but they’ve never once faced each other in a NJPW ring. The trickster king has promised a “clean” G1 and has vowed not to cheat, but we’ll see how long that lasts.

Yano surprised everyone coming out of the gate with a series of snap armdrags and got some good offense going, but made the mistake of trying to win a slugging match and was very quickly put in his place. Ishii leveled him with elbow shots and headbutts, but Yano kept popping back up in defiance and connecting with big suplexes, and even delivered some strikes that wobbled the Stone Pitbull. WHO IS THIS MAN!? In the twist of a century, after some shenanigans and referee maneuvering, it was ISHII who hit a low blow and rolled up his opponent to steal the win. I guess he learned from the best! The most bizarre thing about this whole match is that Don Callis compared Toru Yano to Jack Brisco.

A very slow start with a lot of grappling and jockeying for position. Juice was trying to avoid brawling on the outside, which was smart because as soon as they went there he got distracted by Tanga Loa at ringside and was sent hard into the barricades. Juice tried to wrestle again once they got back in the ring, but again got caught outside and blindsided by Loa. Tama worked him over and hit a neckbreaker with a handful of hair, for two, then connected with a Tongan Twist for another nearfall. Juice eventually mounted a comeback, hit some big right hands (his left is still in a cast), and even reversed a front-mounted choke into a Jackhammer! He should incorporate that in more. Juice with a series of short-arm lariats in the corner followed by a running cannonball. He tried for an Electric Chair, Tama reversed into the Tongan Twist again, but Juice had yet another counter and hit a modified Brainbuster for two. Tanga Loa got on the apron again but Robinson brought him into the ring and hammered away with right hands, then a big left. No DQ if it’s not the legal man! He set up for Pulp Friction, but Tama countered out of the air into the Gun Stun! 1…2…3.

They went to the floor immediately and fought out into the crowd, Sanada getting the upper hand after throwing the NEVER champion through a row of chairs and targeting the back of his neck. Then wound up back in the ring and Goto dodged a standing moonsault, but Sanada landed on his feet and through a dropkick to the neck to stay in control. This went on for several minutes with the LIJ star taking things to the floor and using the barricades to his advantage any time the champion got close to mounting a comeback. He did make the mistake of trying to trade strikes, giving Goto an opening to hit a few stiff uppercuts and short-arm lariats. He went for the Ushigoroshi but Sanada countered into one of his own, then immediately locked in the Skull End. They teased a tap-out, but Sanada sensed it wasn’t gonna happen and broke it to hit a moonsault, but Goto rolled out of the way and responded with a sick lariat turning him inside out. They went back and forth in a great exchange looking for their finishers, wrecking each other with suplexes, trading counter for counter. Goto literally used his head, hit a GTR to the back of the head, but Sanada rolled him up out of nowhere for the closest nearfall of all time. Even the crowd didn’t believe it, and the referee had to verify it was not a three-count. Sanada locked in the Skull End again and tried to use the ropes for leverage, but Goto dropped him down hard on his knee! GTR connects, and Goto picks up his first win of the G1.

Some absolutely beautiful grappling to get things going. It reminded me a lot of Eddie Guerrero and Dean Malenko and the way they moved together, making a simple wrist lock or a test of strength look like an Olympic feat of athleticism. They went back and forth for what must have been ten minutes of just pure chain wrestling, until Ibushi landed a sick punch to the liver, a series of stiff kicks and a standing moonsault. Sabre caught him out of nowhere into one of his three dozen submissions, alternating the hold from a Boston crab to a single leg crab, into a heel hook, then slapped on a bridge for good measure; doing his thing, controlling the pace and making sure his opponent can never predict which hold he had to escape. Ibushi came back with a flash kick, but Sabre caught him in an ankle lock. He came back again and tried for the Golden Star Powerbomb, but Sabre caught him in an Octopus Stretch. It is physically impossible to string together offense against this man. Zack went for a release German suplex, but Ibushi landed on his feet and hit a spinning kick to the side of the head, finally giving him his opening. The two traded hard strikes until they just started slapping the hell out of each other, sweat flying off in all directions, back and forth until both guys collapsed in a heap on the mat. Eventually they struggled their way up to the top turnbuckle and Ibushi rolled into a sunset flip German suplex, for two-and-a-half. Sabre caught him in a triangle choke out of nowhere, but Kota immediately deadlifted him into the air for the Golden Star Powerbomb. Somehow they both had life and began trading strikes again, and actually botched some kind of Tombstone reverseal into the ropes that almost dumped them both on the floor. They traded suplexes and bridges, trying to catch each other out, Sabre countering everything into submissions and Ibushi masterfully sneaking out into even more suplexes. Finally the Kamigoye connected to the jaw, and Kota picks up his first two points.

They played a lot of mind games early on. Omega seemed a bit more cocky after winning the title, almost like he knew there was no way he could lose, and even slapped his opponent across the face at one point. Naito threw him to the floor and teased a dive, but instead just spit on him before hitting the Tranquilo pose. When they finally got series it was Kenny who took the first advantage, hitting lots of knee strikes and very intentionally driving his knee into the back of his opponent’s head at every chance that he got.He hit a backbreaker and a splash in the corner, then slowed things down with some rest holds. They’re taking their time, as I suspect this one is going the distance. The champion actually controlled most of the first fifteen minutes, as Naito was too obsessed with spitting on him and being disrespectful instead of actually trying to put Omega away. He did hit a huge dropkick on the floor sending Kenny into an exposed part of the wood, following with a tornado DDT off the ropes back in the ring. The crowd started about 80/20 in favor of El Ingobernable, and didn’t deviate too far from it throughout. That didn’t help him as he was sent flying over the barricade with a shotgun dropkick, and Omega did his insane big match spot where he moonsaulted from the ring over the barricade, almost killing both of them. Back in the ring he hit a snap Dragon Suplex and traded counters back and forth before eventually connecting with a V-Trigger. He went for the One Winged Angel, but Naito countered with a reverse-rana! A dropkick to the back of the head connected followed by Gloria, for a nearfall. Kenny came back with a sick rolling elbow and absolutely landed stiff, then hit an even more stiff V-Trigger. He looked to put things away, but Naito countered again and hit the Destino for another nearfall! Naito went for a second Destino but Kenny reversed into the One WInged Angel; Naito reversed into an inside cradle; Kenny reversed into a package piledriver! These two are just absolutely insane together… The champion finally said enough is enough and hit a brutal V-Trigger in the corner, to the back of the head. He actually teased a One Winged Angel from the top rope, but Naito rolled through into an Avalanch Sit-Down Powerbomb! A second Destino connected, but Omega still got his shoulder up at 2.99999. A pissed off Naito slapped the champion in the face and went for another Destino, but Kenny murdered him with a piledriver out of nowhere. He set up for it again, and this time hit an even more destructive Jay Driller, but this time Naito kicked out at 2.99999. Finally Omega got him up for the One Winged Angel, it connected, and the IWGP Heavyweight Champion scored his first win of the tournament.