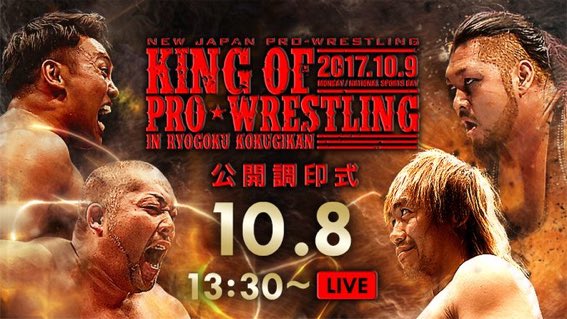 The stars of New Japan Pro Wrestling return to Ryugoku Sumo Hall for the annual King of Pro Wrestling event, featuring four championship matches, a defense of the G1 Climax briefcase and more as we begin the road to Wrestle Kingdom.

You can watch the show live starting at 4:00am EST on New Japan World. A subscription is less than $9 per month and gets you access to all major live events, exclusive interviews, and the entire historical library of NJPW shows. English commentary will be provided by Kevin Kelly and Don Callis.

(2) Toru Yano & Hirooki Goto def. Minoru Suzuki & Zack Sabre Jr. via count-out. The usual distraction from Desperado and TAKA Michinoku. The CHAOS guys couldn’t get more than a single move going against two counter specialists. Minoru got sick of Yano’s tactics and tied him up with a spool of rope, but Yano tripped him up and made it back in the ring by 19 to get the count-out win. He ran away with the NEVER belt afterwards, so somebody is going to die…

– Rocky Romero revealed that his new team Roppongi 3K is none other than Sho Tanaka and Yohei Komatsu, two very popular Young Lions coming back from an excursion with Ring of Honor.

(3) Roppongi 3K def. Funky Future (c) to become the new IWGP Jr. Tag Team Champions! Great match with an unexpected upset! Sho and Yo looked great and the veterans really put them over strong. Ricochet actually hit Sho with the Benedriller and he kicked out, then hit the Shooting Star but it still wasn’t enough. Roppongi won it with their new finisher “3K”, a combination flapjack and Paydirt manuever.

(4) Killer Elite Squad (c) def. Guerrillas of Destiny and War Machine in an Elimination Match to retain the IWGP Tag Team Championships. This was pretty good despite having seen this same match three times during the Destruction tour. The first fall took the longest as all three teams hit their finishers but nobody would go down. All kinds of weapons including chairs, tables and trash cans came into play. Killer Elite Squad hit Tanga Loa with the Killer Bomb to eliminate them, but Tama Tonga refused to leave and destroyed everyone with a trash can lid. War Machine came close to regaining the belts, but KES put Rowe through a table with another Killer Bomb to retain.

(5) Kenny Omega, Cody Rhodes & Jado def. Yoshi-Hashi, Beretta & Jado. There was a bit of comedy here and the usual Kenny Omega midcard match where he wrestles in a shirt and doesn’t take his opponents seriously. That cost him a few times in a preview of his upcoming title defense against Yoshi-Hashi. Things picked up and built into a decent match, with Scurll breaking Jado’s fingers then putting him in the Chicken Wing for the submission.

(6) Kota Ibushi & Juice Robinson def. Hiroshi Tanahashi & Togi Makabe. Another good match that was kept relatively short and sweet. Lots of exchanges between Tanahashi and Ibushi to promote their title match at Power Struggle. Juice actually pinned Makabe with Pulp Friction so the champion and challenger are protected while the young up-and-comer gets another big win under his belt.

(7) Will Ospreay def. Kushida (c) to become the new IWGP Jr. Heavyweight Champion! Easily the best match of the show up to this point. The last time they met was the five star finale of the Best of the Super Juniors, and while this wasn’t quite at that level it was also more intense and had a different vibe. Kushida targeted the limbs throughout the match setting up for the Hoverboard Lock, which he hit twice out of the air; the first time from a Sasuke Special, the second from the Oscutter. The traded brutal strikes and kicks, both guys just looking for any advantage over the other. The challenger ever busted out an inverted 450 splash. Kushida looked to have it put away with the final Hoverboard, but Ospreay countered into a series of pinning combinations before connecting with the Oscutter to win.

– Hiromu Takahashi came out after the match to continue his pattern of trying to issue a challenge, but getting interrupted. This time it was Marty Scurll, who claimed that he will always be better than Will Ospreay and should be considered next in line for the title. He then broke Hiromu’s fingers and left him rolling around on the floor in pain.

(8) Tetsuya Naito def. Tomohiro Ishii to retain the G1 Climax briefcase. As expected, this was an absolute war of a match as both guys hit each other with everything in the tank and then some, destroying their bodies with the Tokyo Dome main event on the line. This was better than their match in the G1 and at Long Beach, and in my opinion was on par with Naito’s match with Michael Elgin in February. After a long, brutal battle Ishii hit a brainbuster near the end that made for an extremely convincing false finish. It took Naito several Destinos, but he finally pinned him.

(9) Kazuchika Okada (c) def. EVIL to retain the IWGP Heavyweight Championship. This was a slow, traditional main event style match with EVIL working over the champion’s neck and upper back, Okada mounting comebacks throughout, leading up to a back and forth exchange of huge moves, strikes and finishers at the end. All the pieces were there, but this one just felt like it was lacking the magic of the instant classics we’ve grown used to from Okada. EVIL wrapped his neck in a chair at the beginning and bounced him off the ring post, which set the tone. EVIL kept toying with him at the end so Okada yelled at him to actually kick him in the face, and they started trading big forearm shots back and forth. It took three Rainmakers to put him away and EVIL never hit his signature STO finisher. They had all the usual beats of a great main event, but the crowd just never came alive and even commentary seemed to fall asleep for awhile. I don’t blame either of them, everyone knew this was just a formality as nobody is beating Okada before he breaks the record and headlines Wrestle Kingdom.

– Naito came out after the match and they made it official. It’ll be Okada vs. Naito for the title on January 4th at the Tokyo Dome. There was some obvious animosity between the two as the champion knows he belongs in the top spot, and the challenger believes it should have been him all along. Naito left the G1 briefcase in the ring when he left, and Okada kicked it over and stood on top of it to make his closing address.