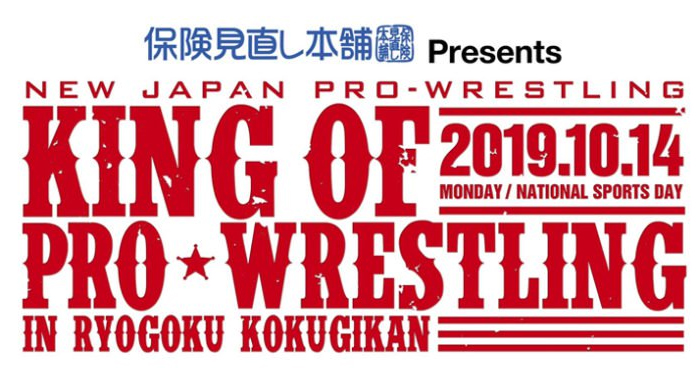 Welcome back, Desperado! A wild opener with all kinds of Suzuki-Gun shenanigans. The end actually saw Desperado take out the referee using one of the boys, and Kanemaru sprayed his whiskey in their face. Despy dropped SHO with his finisher and scored the pin.

As you would imagine Honma missed a Kokeshi and got beat down for a big portion of the match, as Yano did all kinds of shenanigans including remove a turnbuckle. Things built towards the Tanahashi comeback after Honma finally hit the Kokeshi, and the ace cleaned house with Dragonscrews and a running summersault senton. Yano sent him into the exposed turnbuckle but Tanahashi kicked out of a small package, dropped Yano with a Slingblade and hit the High Fly Flow to win.

Your typical Suzuki-Gun brawl before and in the early stages of the match, with Taichi using a steel chair and both men taking as many liberties as possible. Naito did very little as they worked him over with quick tags and cheap shots on the outside, leaving Shingo to try and rally alone. He eventually does and hits a Pumping Bombing on DOUKI then sets up for Made in Japan, but Taichi blasts him with his mic stands to get DQ’d. I guess that was the “final straw” for some reason. They continued to beat him down after the match.

These two beat the absolute hell out of each other. The ultimate villain brualitaizing the ultimate hero. The brawled all around with Suzuki getting easy heat ripping at the mask throughout. Liger was in “battle mode” with a slimmer mask, no horns, and no bulky outfit; just tights and a bare chest, ready to FIGHT a bitch. They tore into each other in a deeply physical battle until Suzuki was finally able to wear his opponent down to the point where he was throwing palm strikes to no effect. Suzuki hit him with the Gotch piledriver to win. After the match he grabbed a chair and teased finishing the job, but instead shocked everyone by throwing the chair aside and getting on his knees, bowing to the legend.

ELP played it up like he was a changed man that wanted to have a fair fight for the title, and even sent Ishimori to the back. Of course five minutes later Ospreay “accidentally” got a thumb to the eyes and Phantasmo baited him into a handshake and went after the eye again. The rest of the match was absolutely insane. They went out into the crowd and ELP did a huge dive off the rafters 15 feet down to the floor. Ospreay hit him with everything he had, and Phantasmo did everything he could to cheat and it was never enough. Tons of insane spots and variations, some stuff I’ve not even seen them do before. Ospreay eventually hit a Shooting Star Press and did an Oscutter off the barricade, then hit another in the ring but Ishimori came back and pulled the ref out of the ring. Phantasmo straight up punched the champ in the balls and hit him with a Cheeky Nandos Kick, blasted him with the title belt, but it STILL wasn’t enough. Robbie Eagles came out and did a massive suicida to take out Ishimori and fought with him to the back. Ospreay rallied with an Avalanch Spanish Fly and a Canadian Destroyer DDT for good measure. He hit the nastiest looking Hidden Blade right to the face, followed immediately with the Stormbreaker to retain. Awesome, awesome match.

A bit of a cooldown match after the ridiculousness of the juniors title match. This was a basic six-man that really only existed to build up tensions between Ishii and KENTA over the NEVER title, and possible White and Goto for the Intercontinental title. Goto pinned Yujiro after a Ushigoroshi and the GTR.

This was a great car crash match. Archer beat the absolute hell out of his opponent and removed all four turnbuckles, and even set up a table in the corner. Juice had his moments but this was ultimately very one-sided, basically showing Juice’s heart as he kept kicking out of being thrown into the turnbuckles, put through the table, and blasted with a steel chair to the head for good measure. Archer built up a giant pile of chairs ECW-style in the middle of the ring, then drove Juice through it with the Blackout but it still wasn’t enough. He started freakout out and screaming expletives, before applying the Iron Claw… It’s over!

After the match the new champion looked to murder Juice for good, but David Finlay came out of nowhere to make the save. Archer tried to chokeslam him but got caught with two stunners, and fled the ring with the title.

I don’t know if this was better than their G1 match but it was damn good. Ibushi had a hard time getting a string of offense going throughout as every time he gained a few inches, EVIL would put him down with explosive power offense. Lots of brutal lariats from the big man throughout. Ibushi at one point hit a springboard avalanche hurricanrana and slowly chipped away with loud, nasty kicks to the chest, over and over again. Towards the end he tried to channel Nakamura with the knee strike, but EVIL turned him inside out with another lariat. Finally Ibushi rallied and hit his own lariat, nailed the Kamigoye, but EVIL somehow kicked out, shocking everyone. That move has been extremely protected. Ibushi immediately hit it a second time to win.

This did not start like your typical Okada title defense as these two rivals just started swinging for the fences immediately and brawling all around. SANADA hit him with a twisting neckbreaker off the barricade early and was able to see every dropkick coming, to the point where he had the champ’s number and worked him over with submissions later on. There was about five solid minutes where he had the Skull End locked in and Okada kept trying to find his way out, and getting trapped again. Eventually he was able to rally and got his knees up to block a moonsault, and hit the Tombstone piledriver. SANADA blocked Rainmakers with boots to the face and swung him around for another Skull End, but Okada sent him flying with an armdrag and hit his dropkick at the 35 minute mark. Finally Okada hit him with a modified Michinoku Driver (similar to Tanga Loa’s Apeshit driver), hit the Rainmaker, and scored the win.

New Japan Pro-Wrestling held a press conference today to unveil plans for their upcoming tour, kicking off on Sunday, January 17 at Korakuen Hall.

Kevin Kelly is in Japan for several weeks, so there will be live English commentary for every single event on the tour, including the eight house show events leading up to Nagoya, and the four additional shows leading up to Hiroshima.

Due to the COVID-19 pandemic worsening in Japan, the events on this tour will start slightly earlier than originally announced, and will be limited to just five or six matches per show. While the action is spread out, there are nevertheless some major marquee matches to look forward to. 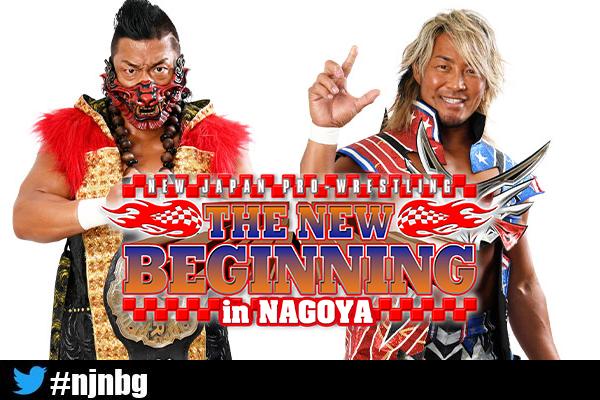 The first leg of The New Beginning tour will see Shingo Takagi defend the NEVER Openweight Championship against Hiroshi Tanahashi. Takagi successfully retained the belt against Jeff Cobb at Wrestle Kingdom 15 in one of the best matches of the entire two-day event. While these two have met in several tag team matches, including two World Tag Leagues, this collision between the “Last Dragon” and “The Ace” is one of the most exciting first-time-ever bouts in recent memory.

New Year Dash saw The Empire recoup some of their momentum after a trio of Wrestle Kingdom losses. Will Ospreay led his monster the Great O-Khan to a six-man tag team victory, before setting him loose on Hiroyoshi Tenzan and his longtime tag partner Satoshi Kojima. Tenzan had to be taken out on a stretcher, setting up two singles matches pitting New Japan’s third generation against its future.

Satoshi Kojima vs. Will Ospreay 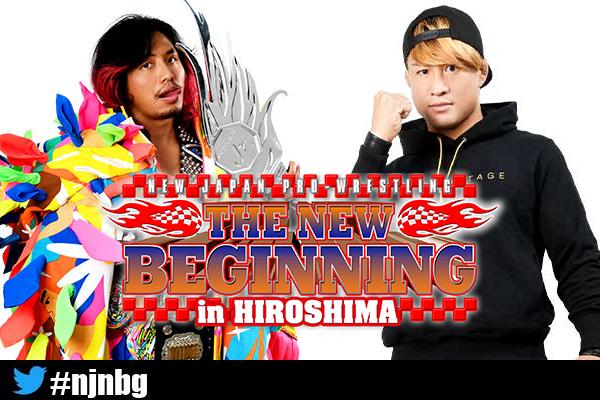 The ticking time bomb of Los Ingobernables de Japon defeated Taiji Ishimori to recapture the IWGP Jr. Heavyweight Championship at Wrestle Kingdom 15. SHO defeated Hiromu in the 2020 Best of the Super Jr. tournament. So… here we are! We also have a rematch between the new IWGP Heavyweight Tag Team Champions and the former champions they beat at the Tokyo Dome. 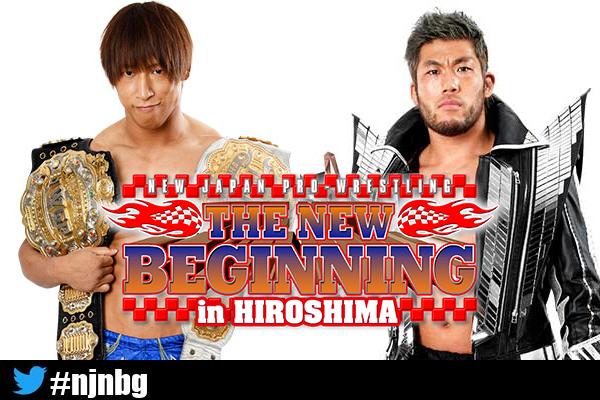 The final night of the 2021 New Beginning tour will see Kota Ibushi make his first defense of the IWGP Heavyweight and IWGP Intercontinental Championships. He takes on the perpetual up-and-comer SANADA, who has been on the losing end of more “must-win” situations than almost anyone save Hirooki Goto. SANADA defeated turncoat EVIL at Wrestle Kingdom 15 and made his intentions for the titles clear.