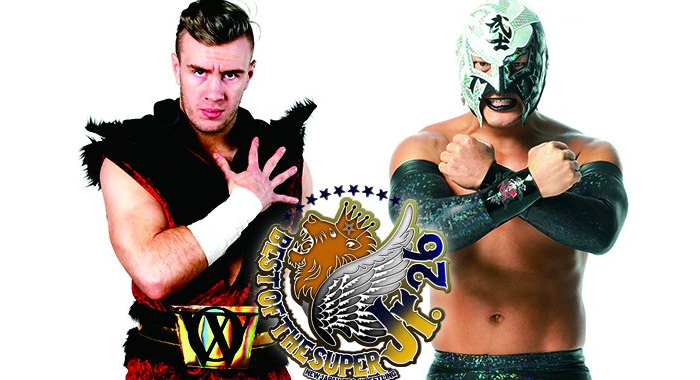 New Japan Pro-Wrestling returns to Sendai Sunplaza Hall tonight (early Tuesday morning in the U.S.) for night two of the 2019 Best of the Super Juniors tournament. The show will be broadcast live on NJPW World with English commentary, starting at 5:30am ET.

Today’s undercard features primers for the A Block, with a tag team match between Dragon Lee and Juice Robinson vs. Shota Umino & SHO looking like a potential early show-stealer. Tetsuya Naito will be in action teaming with his LIJ brother Shingo Takagi, who will be getting an up-close look at CMLL star Titan ahead of their tournament match on day three.

We’ll also so Villain Enterprises in action before Marty Scurll takes on Taiji Ishimori in what should be an awesome, hard-hitting match. Finally, the show will kick off with a six-man tag team match that will act as a preview for two big tournament matches — Tiger Mask vs. Yoshinobu Kanemaru, and Jonathan Gresham vs. Taka Michinoku.

It’s the first night of B Block action, and we’re kicking things off with a match between the two last-minute replacements. One, Ren Narita, is getting a massive opportunity as one of the only Young Lions to ever compete in the Super Juniors, and the other, DOUKI, is a total unknown for most fans.

Bandido faces El Phantasmo in what should be a tremendous high-flying and wild match between two first-timers who will be looking to prove themselves and pick up an early two points. There’s also Will Ospreay and Bushi who have had great matches in the past and could easily steal the show, and YOH will look to live up to the main event expectations just 24 hours after his tag team partner, SHO, put on an instant classic against Shingo Takagi.

— Will Ospreay vs. Bushi