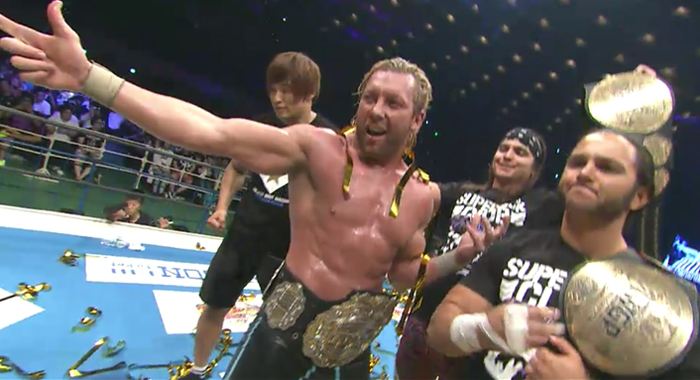 In addition to the other major news stories that we’ve already covered this morning, the following are some general news and notes from today’s NJPW Dominion event in Osaka, Japan.

– The crowd at Osaka-Jo Hall was a legitimate sell-out with “more than 12,000” people in attendance. We’re still waiting on an exact number. In fact, it was the quickest sell-out NJPW has ever done in the building, and for their annual Dominion event in general.

– In their very first title match since moving to the heavyweight division, Matt and Nick Jackson defeated Evil and Sanada from Los Ingobernables de Japon to become the new IWGP Heavyweight Tag Team Champions. They have now won 11 championships in NJPW, but this is their first in the Heavyweight division.

– Hiromu Takahashi, who won the 2018 Best of the Super Juniors tournament earlier this week, defeated Will Ospreay in an outstanding match that will likely go overlooked by some because of the double main event that followed it. Seriously, go out of your way to check this out if you haven’t already.

– Naito was actually busted open multiple times in his match with Jericho. The first spot came after being put through a table before the match technically began (I believe it was the second table that actually did it), resulting in a cut over his eye that became a problem throughout the entire match. He was later bleeding from his cheek, or the side of his head. The match itself was incredibly physical, and it’s believed that both instances of both were done hard-way.

– Michael Elgin defeated Hirooki Goto and Taichi in a triple threat match to capture the NEVER Openweight Championship. Despite the fact that Taichi challenged for the belt, the actual title has basically become the “strong-style championship” as it just rotates from big brute to another big brute every few months. That’s not a bad thing.