One of the most anticipated professional wrestling events in recent memory will take place on September 1, 2018.  Are you ALL IN?

The ALL IN event has been described as the biggest indie wrestling show ever.  The event that started as a dream by the ‘American Nightmare’ has started to come together quite nicely.  Cody wanted to put on a wrestling show that achieved one goal; draw 10,000 people.  After months of rumors and speculation, we have the date, we have the city, and we have the arena.  Names of the individuals set to appear continue to trickle in each day with some of the greatest names in wrestling today confirmed to appear at ALL IN.

In addition to the ALL IN event on Saturday, there will be a convention taking place in the days leading up to ALL IN.  Starrcast will be joining forces providing fans the opportunity to meet some of the participants from the ALL IN and possibly other names in the wrestling world.  Also in an effort to draw people to the events, the Starrcast convention will serve as host to several wrestling podcasts performing live.  As of this writing, Something to Wrestle with Bruce Prichard and Eric Bischoff’s 83 Weeks are confirmed for Starrcast.

The following can be found on the Starrcast website:

“Not only will your favorite wrestling podcast hosts be performing their shows live on multiple stages, the biggest names in wrestling will be joining them, and of course the wrestling media will be on hand to cover it all! Cody Rhodes, the Young Bucks, and many others competing at ALL IN will be appearing at STARRCAST!  Pictures autographs, one of a kind experiences, live podcasts and more will all take place at STARRCAST!” 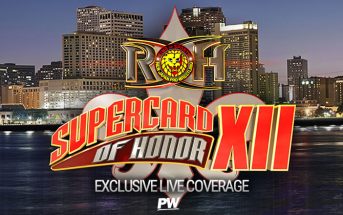 This is shaping up to be like a mini-WrestleMania weekend.  I’m not exactly sure what names could appear at the convention other than the confirmed names to appear at ALL IN, but I could easily see this becoming something similar to a WrestleCon type convention where current indie wrestling stars and legends appear.  Starrcast definitely helped create a weekend out of the event that could potentially draw more people.  For me, ALL IN was looking at being a one- day affair.  With the announcement of Starrcast, I added an extra day and who know, maybe more.

Ring of Honor just had their largest crowd ever last month at Supercard of Honor XII in New Orleans.  Nearly 6,000 people packed the UNO Lakefront Arena.  It just so happens that nearly half of the confirmed ALL IN participants also competed at Supercard this year.  Unfortunately, wrestling fans around the world flocked to New Orleans for WrestleMania weekend so ALL IN does not have the added fanbase in town.

However, an advantage for ALL IN is that there is no other major wrestling event in the same town at the same time.  Supercard of Honor took place on the same night as NXT TakeOver.  While both were solid events, it forced fans to choose between the two.  I personally failed in my attempts at cloning, so I unfortunately could not be at both events; I chose NXT.  ALL IN however stands solo in Chicago. 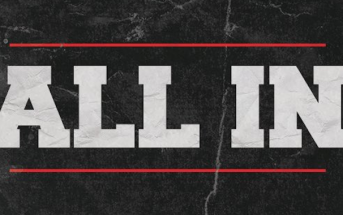 Chicago is no doubt a wrestling city and having the event there will ensure a solid crowd for the event.  Just based on the names announced and the location, I could see ALL IN drawing close to what Supercard did last month.  The key is drawing in that extra 4,000 people.  For me, this event seems like a once-in-a-lifetime event that is must see.  Most of the information for the event is unknown.  What will the matches be? Who else will be appearing? Will Flip Gordon be there? Any championships on the line?  Maybe the mystery of the event is what will lure some people.

I’m sure more names will be added to the event, primarily from either Ring of Honor or New Japan.  It’ll be interesting to see how the matches play out.  Based on the names announced so far, we may get a Cody vs. Omega rematch, not sure who the Young Bucks’ opponents will be, who will Okada face?  Over the next few months, the card will surely take shape and we’ll know what we are exactly in for.  From now until ALL IN, the War of the Worlds Tour, Best in the World, Dominion, and the G1 Climax will take place.  These events will help outline what the ALL IN card could look like and who else may appear.

Tickets go on sale May 13, 2018 so we will get some sort of idea how the sales pan out soon.  Let’s show some love and pack the Sears Centre Arena.  I’m ALL IN, and you should be too (Sweet)!