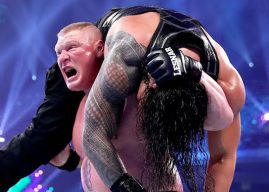 After Lesnar survived SummerSlam and beat Strowman at No Mercy, it was pretty clear that he was holding it till WrestleMania where he would face Roman for a second time.  Fast forward to April 8 in New Orleans.  Brock Lesnar vs. Roman Reigns in the main event of WrestleMania 34.  The crowd was loud.  The crowd was rowdy.  Beach balls flying everywhere.  And Brock hits Roman with an F5 for the 1, 2, 3.  SHOOK.  Nearly every single person in that building and watching at home thought surely Roman Reigns would win the title.  After all, what did we wait an entire year for?

Everyone knows Brock wants back in the UFC.  After six years of moonlighting in the WWE, it was time for Brock to move on.  He was an attraction that has run its course.  In a world of where backstage news and speculation is not a secret anyone and virtually anyone can get this info through the use of social media, true surprises are rare.  But every once in a while, we get a curveball.  The finish to Lesnar and Reigns’ match at WrestleMania 34 was truly a curveball.  Yes, not many people wanted Reigns to win, but there comes a point in time when you just have to give it to him and move on.  Following their match at the Showcase of Immortals, a rematch took place on April 27 at the Greatest Royal Rumble where the conclusion was met with heavy controversy.  Since then, Lesnar and the Universal Championship has been M.I.A.

Continued On the Next Page…