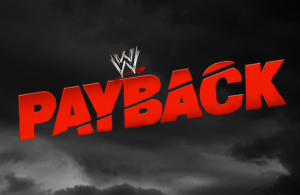 To say RAW exclusive PPV specials have been underwhelming since the brand extension is a huge understatement. Last night’s Payback event however may be proof the “B” show is turning the corner. Working with a clean slate after WrestleMania and without so much as an appearance by their two premiere title holders in Brock Lesnar and Dean Ambrose, the RAW brand produced an excellently timed, logically booked event that was enjoyable from start to finish.

The Pre-show really got the crowd going early and made it easy for the rest of the roster to keep the momentum going with intense performances that were perfectly placed on the card and well booked by the creative team for the duration of the show. The match and finish were good and while we’ve seen Enzo and Cass take on the Club more than enough over the last few months it’s a good win for Enzo and Cass. MizTV was a great way to get two big stars out in front of the San Jose crowd. Finn Balor shined here, able to go shot for shot with one of the best on the microphone in The Miz and really felt like a star. With one line he set up a potential SummerSlam main event by stating that he was “going to get his belt back” before we all watched the Miz get beat up, again (yeah, he’s happy to be back on RAW). 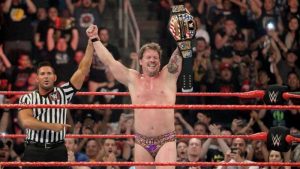 Jericho and KO kicked off the main show with a solid back and forth match with a faster pace than their WrestleMania bout and a finish I didn’t see coming. The finish was a fitting end to their feud with Jericho getting his revenge by making the dastardly Owens submit. Jericho now heads to SmackDown with the US title and ships KO back to RAW. If this is his last match as an active competitor this year, maybe ever, it was a good way to go out for Y2J.

I was all in on KO taking over SmackDown but now that he’s going to be moving back to RAW, Jericho getting the win here was the smart decision creatively for two reasons. The first is now you can put KO and Samoa Joe back together on RAW. With both men coming off losses at Payback the RAW roster could be in for a rough night should the vicious pair reunite tonight.The second is Chris Jericho is likely finishing up his run this week before his band Fozzy goes on tour. His match with AJ Styles is supposed to take place at Backlash in three weeks in Chicago, but if WWE writes him off television on SmackDown Tuesday night it should happen at the hands of Baron Corbin. Taking out a legend like Jericho would certainly continue to raise his profile and setup a big time match with Styles, who he’s already been feuding with for weeks for a vacant U.S. Title at Backlash. It’s a simple way to continue Corbin’s push and having him capture a vacant U.S. title lets WWE build the blue brand’s mid-card around the young talent. Defeating Styles underhandedly at Backlash can also move AJ Styles out of the mid-card title picture and back to main event WWE Title matches where he belongs.

Neville and Austin Aries had another quality match and I’m happy their feud is going to continue. Both guys have put on a hell of a program that I’m hoping pays off with a 2 out of 3 falls or a 30 minute iron man match at Extreme Rules. 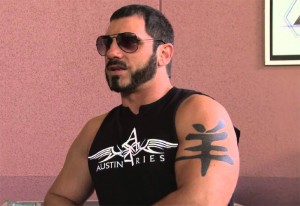 That sunset flip powerbomb off the top into Aries’ submission hold “Last Chancery” was a great spot to finish off a match that would end in DQ. Like I said I’m happy the feud is continuing and I have zero problem with the finish. Neville’s escape with the Cruiserweight title here would set off a cascade of heel highlights that would permeate the rest of the show. 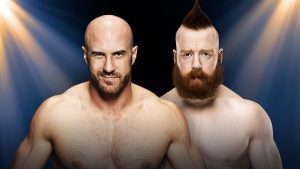 The tag team title match was athletic and intense from bell to bell and helped raise the bar for the tag division going forward on RAW. Cesaro and Sheamus really impressed here. I think my eyes popped out of my head when I saw the height Cesaro was able to get on that leg drop. All four guys worked great together here and have me excited to see another match between them for the titles. The heel turn and assault on the Hardyz post match was fantastic and adds some depth to Cesaro and Sheamus as a team. Sheamus has been a stellar heel throughout his career but I think a lot of people forget how good Cesaro was as a bad guy. He’s been a fan favorite for quite some time but I’m anxious to see what facets he can add to what I’m hoping is a quality run as a heel going forward. The only problem is most of the international talent on the main roster are all heels now. Hopefully these two don’t get lost in that shuffle, and we don’t get the League of Nations all over again (for the love of God no, please no).

Payback kept rolling with a fourth consecutive title bout, this time for the RAW Women’s Championship in champion Bayley’s hometown. Excellent placement on the card here as the hometown girl kept the crowd from cooling off. I didn’t have high expectations for this match going in but I thought it was very good and both women told an excellent story. The last 8 minutes or so in particular were fantastic as there was one high impact sequence after another until the conclusion of the match. Alexa Bliss and Bayley’s styles mesh well together and they really tore it up while only scratching the surface of what has the potential to be 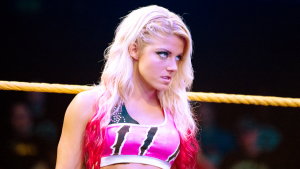 The evolution of Alexa Bliss continues to impress. From a peppy cheerleader gimmick and then to a heel manager in NXT, to being a two time SmackDown Women’s champion and one of the premiere female villains in wrestling and now making history by being the first woman to be SmackDown and RAW Women’s Champion. Bliss gets better by the week and adds a much needed shot of sex appeal that differentiates her from the rest of a talented women’s division on Monday Nights.

Here’s a sentence that’s going to get me some major criticism…I liked House of Horrors. I said it and I stand by it. It was very different from what we see on WWE television week after week and in this case that was a good thing. I didn’t get any kind of “Final Deletion” vibe from it. It came off as a more Lucha Underground style of production to me. 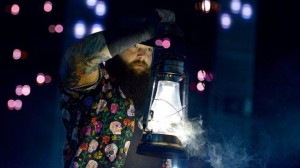 Close quarters brawling combined with an eerie supernatural motif not unlike some stuff fans might have seen from Mil Muertes on Lucha Underground.  Bray and Orton made the most of what they had to work with telling a believably brutal story and I was a big fan of how both men sold the damage that had been inflicted on them. If the only illogical piece of creative booking on a RAW show is “How did Randy Orton beat him back to the arena when Bray took his limo?” I can get over it. Especially when the finish gets Bray a PPV win and Jinder’s involvement protects Orton and gets their program firing on all cylinders three weeks before Backlash.

Great use of Jinder here, the shot of the Hindu announce team earlier in the night tipped their cap a bit but regardless, with such a short time to build him as a credible threat WWE is doing a great job with Jinder thus far. House of Horrors like Jinder Mahal isn’t something weekly audiences are used to. They’re both something different than what fans are fed month in and month out. I’m not saying you should like or dislike them just because they’re not what we’re used to, but don’t arbitrarily hate every time WWE tries…emphasis on tries, to do something a little outside their own norms.

Samoa Joe and Seth Rollins delivered a methodical and technical showcase of how a long built rivalry is supposed to be executed at a PPV special. 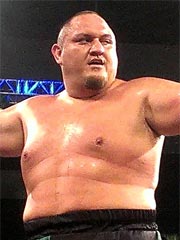 The heart of Rollins pitted against the malice of Samoa Joe made this my favorite match of the night hands down. Rollins and Joe can go out and have good to great matches with anyone they get in the ring with but after last night putting them with each other for an extended period of time could give us some of 2017’s best matches. While Joe suffers his first loss I liked the roll up finish, he stays strong and Rollins survives Joe more than out and out defeats him which is a good call. No shame in taking your first L at the hands of a 2 time WWE champion in a PPV show stealer. 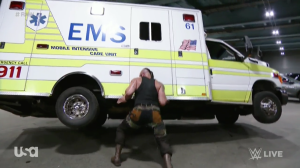 Braun Strowman is the fans’ avatar for all of their hatred for Roman Reigns and disappointment over the Undertaker’s departure and that’s why the crowd has been responding to him regardless of the devastation he leaves in his wake week after week. While his push seems like it’s more about humanizing and generating sympathy for Reigns right now, Strowman is on a collision course with Brock Lesnar at…gasp…Great Balls of Fire in July.

Roman was so taped up in this match it was unbelievable that he was able to generate offense at any point in the match. That said he sold great for Strowman who put down another brutal beating on Reigns to the delight of the WWE universe. Strowman gets the victory here while Roman wasn’t 100% going in. He beats Reigns clean, leaves him laying and spitting up blood in the ring before he practically crawls to the back post match.The beginning of RAW Talk undoubtedly set up an Ambulance match between the two at Extreme Rules as it saw Strowman attempt to attack Reigns again while he was seeking medical attention at the back of an ambulance only to have Reigns side step the charging behemoth and send him careening through the door of the ambulance.

Braun has come a long way from having fans rip the idea of him facing the Undertaker at WrestleMania in the not too distant past and has become an impressive talent and main eventer for WWE. My friend goes into a full on Archer impression and screams “RAMPAGE!!!!!” when Strowman appears on camera. Fans, myself included love watching Braun Strowman annihilate the RAW roster.  An Ambulance Match with Reigns next month where Roman won’t be out and out pinned again spells victory for Strowman propelling him to the Great Balls of Fire main event with Brock Lesnar. Am I the only one who can’t wait to see a Paul Heyman promo selling the WWE Universe on Great Balls of Fire? It could be on par or better than his legendary “molten lava” promo from a few years ago.

Certainly the best solo PPV for RAW thus far, Payback was a highly entertaining show built on the backs of incredible performances by all of the talent involved, well thought out match placement on the card that never let the off the gas for 3 hours plus and methodical creative booking. All without appearances by Lesnar or Ambrose and without matches that included The Miz and Finn Balor. Combine that with the uniqueness of House of Horrors, a strong appearance by Jinder Mahal and the reacquisition of Kevin Owens and Payback was a big payoff for WWE and Monday Night Raw.