If you had 1,000 words to explain the legacy of Hulk Hogan, what would you say?

If you had to condense all of the calamity of the Montreal Screwjob into one chapter that could be understood by wrestling savants and rookies alike, what might you leave out?

For a wrestling promotion that has been around since the Kennedy administration and has seen hundreds of pay-per-views and thousands of wrestlers, it can seem like a mountain of a task to scale years of World Wrestling Entertainment history into an informative-yet-captivating volume of information. With this task in mind, Bryan Alvarez of Figure Four Weekly has compiled what he considers to be the essential details of the history of WWE in his new book, 100 Things WWE Fans Should Know & Do Before They Die (available July 16th from Triumph Books).

The book is formatted exactly as it sounds: Every chapter is dedicated to one of 100 things relating to WWE, spanning people, pay-per-views, storylines and anything of note your run of the mill wrestling fan should know about WWE’s history of over 55 years (as well as small tidbits about WCW, ECW and AEW). The book briefly explains said wrestling histories and gives readers the bedrock knowledge of a wrestling subject, and sometimes, the motivation to go out and learn more elsewhere. It’s one thing to read about Brian Pillman sternly spitting “I respect you, booker man.” at Kevin Sullivan at SuperBrawl VI, but seeing it with your own eyes completes the image.

Rather than putting together a disorganized list, Alvarez set out to assemble a ranked standing of everything of importance pertaining to WWE, from Vince McMahon to the Intercontinental Championship, all while putting the 100 entries into context. “I didn’t want this to be ‘Oh, I could just open up Wikipedia and just read all 100 of these things, it’s the same thing,’” Alvarez said. “I wanted to focus on what was important, not focus on what was not important and try to put everything in a historical 1,000 words.”

While most of the chapters break down important facts like snappy and easy-to-read biographical articles, Alvarez includes personal anecdotes in certain chapters to drive home the seriousness of certain topics as well as offering his own perspective as a wrestling fan of 30 years. Alvarez recounts his own memories of being in the Mercedes-Benz Superdome when Brock Lesnar ended the Undertaker’s WrestleMania undefeated streak at WrestleMania XXX, driving many fans to stunned silence or screams of disbelief. Another chapter mentions Alvarez’s friendship with Chris Benoit alongside the facts of the latter’s wrestling career and psychological downfall ending with Benoit murdering his wife and son. As polarizing of a topic as Benoit is in the wrestling community, I thought Alvarez’s chapter was very informative, fair and tasteful when examining the major points of Benoit’s life and career.

Roughly 20 of the chapters are not biographical entries but “things to do” or “events to attend” for WWE fans trying to accomplish the full wrestling fan experience. They can be as easy as “Subscribe to the WWE Network” and “Watch Every Five-Star WWE Match” (according to Dave Meltzer’s Wrestling Observer Newsletter ratings), to one’s that get you off the couch like “Attend a Cauliflower Alley Club Banquet” or “Follow WWE Around the Loop” (of live shows they put on in a week stretch). Regardless of your wrestling-watching experience, the short list can either help you knock off a few things on your wrestling fan bucket list or help you rediscover why you watch the spectacle to begin with.

My biggest critique about this book is that it only scratches the surface of the major facts of WWE’s biggest names and events (I.E., a chapter on the Hardy Boyz doesn’t mention Jeff Hardy’s WWE and World Heavyweight Championship reigns in 2008 and 2009, cementing him as one of the most popular WWE superstars in the latter half of the 2000’s). Then again, if Alvarez did include every important detail, the book would end up being thousands of pages long. It’s difficult to crunch decades of wrestling history into a few hundred pages, while also grabbing the attention spans of wrestling fans and novices alike. As he explains on page 260, “In putting this book together, I’ve tried not to just list everything that every wrestler did in their career. For many of these names, a full book would be needed; plus, you can get all of that information online. Instead, I have tried to encapsulate their careers and concentrate on the things that made them stand out, the defining moments in their career, or their legacies.” At a little over 300 pages, the book packs an informative punch while still remaining a manageable read. Alvarez said that one of his major goal’s for this book was to make it as marketable and as widely-acceptable to wrestling fans of any degree. “I wanted to make it a book where if you’ve been watching wrestling since 1965, you can read and enjoy this book,” he said. “If you’ve been watching wrestling since 2015, you can read this book and learn a ton about the stuff you didn’t know about. If you’ve been watching since 2004 and you’re more of an inside fan, I wanted to try to add stuff that would make the book interesting to you.”

Overall, I personally enjoyed 100 Things. Alvarez does a great job of siphoning years of wrestling history and condensing it into a handful of easy to follow pages. I will admit as a self-admitted wrestling fan of 15 years, I didn’t learn a lot of new information in the book. However, I did learn a few new tidbits about some of the men and women featured in the book such as the origins of Daniel Bryan’s “Yes!” chant and Captain Lou Albano’s beginnings as a manager in the WWWF.

While decades-long wrestling fans might not learn a lot of new information from this book, I would definitely recommend this to a family member or significant other or a friend who is a budding wrestling fan. This is the perfect gift to bring them up to speed on the big facts of some of the most important figures in WWE history. The book’s final pages present a guide for “Wrestling Terms You Should Know” that serves as a handy-dandy guide of insider terms to build up acumen on everything from “bumps” to “squashes.”

For an individual perspective on the most important details of WWE history from one of the most well-regarded pro wrestling journalists today, Bryan Alvarez’s 100 Things WWE Fans Should Know & Do Before They Die is worth picking up this summer wherever books are sold. 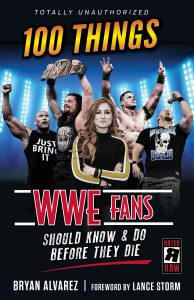 Special thanks to Bryan Alvarez for speaking with me for this review and Bill Ames of Triumph Books for making this review possible.