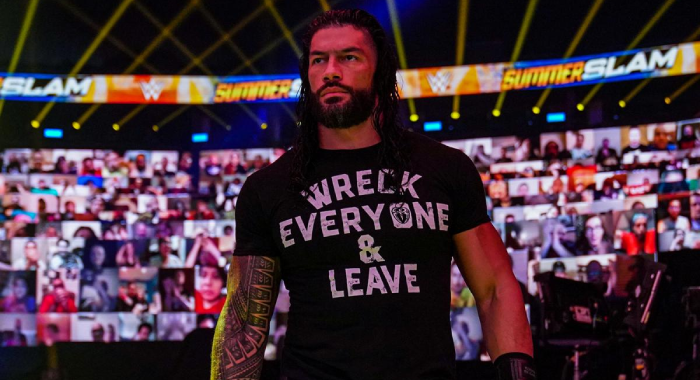 The current Universal Champion, Roman Reigns, has revealed that work is currently taking place on a new theme song for him.

Reigns spoke with Bleacher Report and revealed that music is in the works, which will be the final piece of his Shield days coming to an end.

“We’re working on it,” Reigns said of a new theme song. “It’s not easy because I’m not going to… With this character, it has to be the right vibe. We can’t just hire a rapper and check out this guitar riff. It can’t be some rock music. The Shield music, I wasn’t even really into it back in the day; but over the years, it just started working. You get so used to it that I just time my pace to it. But yeah, it takes some time and it has to be right.

“In order to move away from something you’ve had for so long and is so recognizable like the music that I have now, it’s got to be perfect. It’s taking some time, but we’re definitely working on it, so please be patient.”

One change that Roman has already made is adding a submission finisher to his arsenal. Roman has begun using the Guillotine at different points since his return, and he admitted he’s been wanting to use the move for years.

“I’ve been wanting to use that for years,” Reigns said of the guillotine. “No one’s to blame, it’s just the process of the creative. It’s like, ‘What if I just pulled out a submission?’ I’ve been saying that for years. Everybody knows the Spear. The producers that I work with all the way up to the head man said, ‘I think the finish would be better with a Spear.’

“That’s great because for years we built that spear up and up. Even today, we’ve manipulated it over the past few months, but nobody’s going to say, ‘I can’t believe he lost to that spear.’ If he won with that spear, they’d be like, ‘Yep, he won with the spear. It’s all good.’”