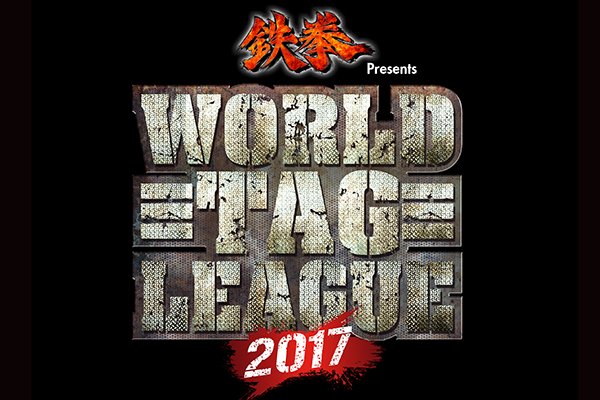 The 2017 World Tag League, New Japan Pro Wrestling’s annual round robin tag team tournament, kicks off this Saturday at Korakuen Hall in Tokyo. The winner is expected to face the Killer Elite Squad for the IWGP Tag Team Championships on January 4th at Wrestle Kingdom 12.

This year’s tournament really is a “World” Tag League, with 17 out of the 32 performers coming from outside of Japan. Hot off his debut with Impact Wrestling, Sami Callihan will make his NJPW debut partnering with another former NXT talent that left the company for greener pastures, Juice Robinson. Jeff Cobb will debut as Michael Elgin’s partner, and Chuck Taylor joins long-time tag partner Trent Beretta, who recently made the jump to the heavyweight division.

We also have the main roster graduation of the monstrous Katsuya Kitamura following his time as a Young Lion, and the return of Henare who spent most of 2017 on the injured list.

One big difference in this year’s tournament is that many of the main event stars like Tetsuya Naito, Kazuchika Okada, Hiroshi Tanahashi and Kenny Omega will not be competing. Since the winner of the World Tag League gets a title shot at Wrestle Kingdom, New Japan made the call to keep the names who are already scheduled in top title matches off the tour altogether. So ultimately, less major star power, but more opportunity for actual tag teams and new talent debuting.

Every team in this year’s tournament met with Japanese press on Friday in Tokyo to give statements, which you can check out below.

Opening night is Saturday, November 18th (early a.m. in the States) with a show live and free on New Japan World. There will be live shows on November 30th and the finals on December 11th which will have English commentary. Tournament matches from all the other shows will be uploaded later in the day after they run live in Japan.

Juice Robinson: “Ladies and gentlemen, allow me to introduce my tag partner – I told you it was a surprise – the Callihan Death Machine, Sami Callihan. He’s death. I’m Juice. Our new name is ‘Death Juice’. We’re gonna woop some ass, we’re gonna win the A-Block, we’re gonna walk into Fukaoka and walk out with those mother f—ing trophies, baby! And then we’re gonna high-step our asses down the aisle at the Tokyo Dome and win the tag team championships.”

Sami Callihan: “Look at me and Juice, we’re quitters. We quit WWE because we wanted something better. We wanted to be New Japan Pro Wrestling superstars. We’re here, and we’re gonna win the mother f—ing Tag League, cut and dry. Thumbs up, thumbs down!”

Bad Luck Fale: “Just one thing… F— the One Sweet. Too Sweet, for life.”

Chase Owens: “Last year’s Tag League 2016 I made my heavyweight debut. I tagged with Kenny Omega and things didn’t go the way that we planned. But one year competing for the very best wrestling company in the world, one year facing the very best competitors in the world. 2017 World Tag League, we have a plan and a goal, and that goal is to win the A-Block and win the whole damn thing.”

Henare: “It’s good to be back in Japan. Nine months. Nine months I’ve been out… Through that whole time I knew I needed my chance, and the Tag League came up and I knew it was my chance. What I needed was to find someone who understood what it felt like to be in hospital bed, lying down, watching everybody overthrow you. Sitting at home, being sent back to New Zealand, I needed somebody that knew what that felt like, to be exiled. I had the same injury as Makabe-san. I knew when he said yes that we had the advantage. Everybody knows here that I’m the young guy. My advantage is exactly that – they’re underestimating me. They forget that I was in the Tag League last year, that I’m partnering with the person that won the 2016 World Tag League. And they’re forgetting that I’ve been away for nine months, starving and hungry, and now me and Makabe, it’s time to eat.”

Michael Elgin: “So this is the first time that myself and Jeff Cobb have teamed up, but back in the States we’ve waged war against each other. When it was coming time for Tag League I thought who better to have my back than a man that I respect like Jeff Cobb. And I think this Tag League, no matter what anybody else says here, Jeff Cobb shows all of you just how good he is. And we show Smith and Archer, we want those belts.”

Jeff Cobb: “You know it’s an honor and a privilege to be wrestling in New Japan, and make my debut at the World Tag League. I respect everybody in our block, and I respect my tag team partner, but when Tag League starts I plan on showing Japan and New Japan what a real suplex party is. And each and every one of these people here are invited.”

David Finlay: “World Tag League 2017. I was sitting in my chair, looking around and I noticed that in B-Block alone there are four teams that have already held the tag team titles. And all four of them have already held them this year. I think it’s safe to say Big K and myself aren’t favorites in this tournament, but that doesn’t matter. That doesn’t phase me, and it doesn’t phase Big K. It doesn’t change the fact we’re going to go into every single match and give everything that we have, and walk out of Tag League better wrestlers.”

Raymond Rowe: “Everyone in this building and everyone across the world knows exactly what War Machine is capable of. We’re not happy. We’re not here to put on cute outfits or make jokes. We’re here for one thing: revenge. We don’t have those IWGP tag team titles anymore, and it’s keeping us awake at night. I can’t sleep, I can’t eat. I can’t focus, without remembering that. I’m done talking.”

Trent Beretta: “Good people of Japan, let me introduce you to my best friend, the Kentucky Gentleman Chuck Taylor.”

Tanga Loa: “As you can see behind us, B-Block is a great collection of competitors. These gentlemen are not only some of the best of the world, but they could be the best in New Japan Pro Wrestling. I’m excited, and I hope you guys are excited. I don’t want to speak too much about these guys – I don’t think I should put them over too much – but these guys are good, and I’m looking forward to this Tag League Tour. My brother and I have been here before, so we’ll do what we always do.”

Tama Tonga: “You’re too kind. Way too kind. That’s the problem, everybody here’s been mistaking our kindness for weakness. And then the time comes when we’ve had enough and we pack your sh– in. And that time is now, at the World Tag League. GoD. Guerrillas of Destiny. Guerrilla tactics, tactics, tactics. We are all about tactics. Last year we had that stolen from us. We should steal their tactics from last year [points at Toru Yano]. Wait until everybody works their ass off the whole tournament, and then come in on New Year’s Dash, put themselves into Wrestle Kingdom and then steal it from [us], and from Makabe and Honma. That’s a great tactic. I think we should sit out this thing, wait until everybody’s tired, come in and then beat the sh– out of everybody. Or just hit them in the nuts, roll them up and take it. I think that’s what we should do.”

Lance Archer: “We are the IWGP tag team champions. We have what everyone here wants. These trophies, this World Tag League is their ticket to Wrestle Kingdom to fight us for the IWGP tag team championships. But the one thing we want are those trophies. We want the World Tag League, and that makes us more dangerous than we already are. We took these titles because they belonged to us. While we were gone we were still tag team champions around the world, beating up everyone we could, everyone that got in our way. We came back to New Japan, I came back from my own injury, and we took back our titles. So 2017 is going to be the Killer Tag League.”

Davey Boy Smith Jr.: “A few of you may know that my sensei Tokyo Joe passed away in Calgary, Alberta, Canada. This is the man that taught me everything that I know, and everything that I show in the New Japan ring. Tokyo Joe taught me what Strong-Style is all about, something that’s missing from New Japan these days. The kindergarten comedy and circus show that it’s becoming. Strong-style belongs to Davey Boy Smith Jr. Strong-style belongs to KES. This year’s Tag League belongs to KES. Killer Tag League, and KES will conquer.”