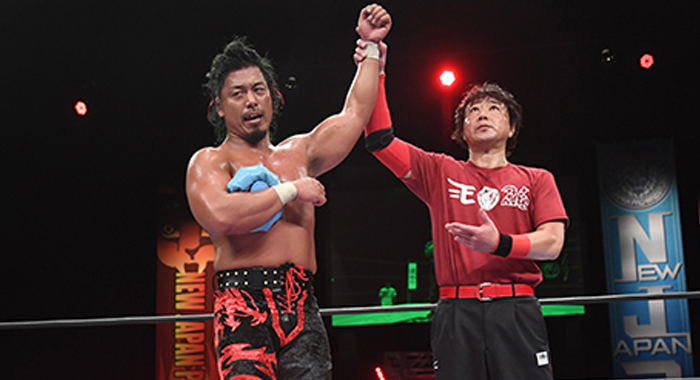 After an absolute war turned into an instant classic wrestling match this Monday in Japan, the still unbeaten Shingo Takagi finally gave showed respect for one of New Japan Pro-Wrestling’s fastest rising stars – one half of the IWGP Jr. Tag Team Champions Sho Tanaka, or SHO for short.

The two artists tore the house down at Sendai Sunplaza to kick off the first night of the 2019 NJPW Best of the Super Juniors tournament, in a match that has already been pegged by some as an early Match of the Year candidate.

One of the major story-driven threads throughout the nearly 26-minute contest centered around Takagi’s raw power and stength, as he absorbed blow after blow from his opponent time and time again, while SHO refused to stay down no matter how many times he nearly lost his head to one of The Last Dragon’s devastating Pumping Bomber lariats.

Takagi and SHO have actually faced each other multiple times in the ring during battles between Los Ingobernables de Japon and the current junior tag champions, Roppongi 3K, but this was the first time the two had ever met in singles competition.

After numerous Pumping Bomber lariats and narrowly escaping a modified Kimura Lock, Takagi finally connected with his signature Last of the Dragons finisher to score his first two points in the tournament, and extend his unbeaten streak for one more evening.

Following their incredibly hard-fought battle, Takagi was forced to change his tune about SHO, who he has been relentlessly tormenting for the past six months.

“I thought I could beat that punk in 15 minutes if I took it seriously. I didn’t let up at all, and I didn’t make any mistakes. Over these last 7 months, I kept calling SHO a brazen brat. But he showed me what he’s made of, so I gotta take that back. He is strong, that’s for sure, and he’s still getting stronger.”