Ring of Honor is gearing up for two big Glory of Honor events this weekend in Baltimore and Philadelphia, featuring Jay Lethal defending the ROH World Title against Silas Young, and The Kingdom vs Jonathan Gresham, Jay Lethal and a partner yet to be announced.

I had the chance to speak with current Women of Honor Champion Sumie Sakai ahead of this weekend’s big events, and below is part one of the interview. Part two of the interview, featuring Sakai discussing the Women’s Revolution, her future goals in pro wrestling, and more, will be released later this week. 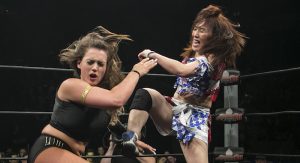 -Ring of Honor has yet to announce your match(es) for Glory By Honor in Baltimore and Philadelphia, who would you like to face at the events?

“If I can wrestle in Baltimore I would be so happy with that! ROH announced Britt Baker will be in Baltimore. I had fun in a tag team match with her in Pittsburgh, I hope to wrestle her or tag with her again!”

-It has been said that you developed a love of American Pro Wrestling back in the late 1990’s. What was it about American wrestling that you loved and who are some of your early American influences?

-Given the momentum women’s wrestling has gained in the past several years, what does it mean to you to represent ROH as the Women of Honor Champion?

“This is a big honor for me because of what Women of Honor represents. I want to maintain this high standard of women’s wrestling all while challenging myself and my opponents to be better with each match. I am humble, and I always want to keep learning and getting better, and I want to set that same example for the entire Women Of Honor division.” 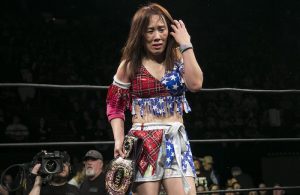 -If you could envision a future for the Women of Honor division, what would it look like?

-Who would be your dream opponent for the G1 Supercard event at MSG?

“Tenille Dashwood again if I am still Champion that day! Or, maybe a Women Of Honor vs STARDOM tag team match.”

Glory By Honor streams live worldwide for all HonorClub members on Friday, October 12 at 8e/5p. Available at ROHHonorClub.com or the ROH App on all Apple and Android devices, and Roku.