Earlier this week, I had the chance to speak with ROH Women of Honor Champion Sumie Sakai, and you can check out part one of the interview, in which Sakai talks Glory By Honor, G1 Supercard at MSG and more, at this link.

In part two of my interview with Sakai, which you can check out below, the Champion talks the current Women’s Revolution in wrestling, if she plans to return to MMA, and her ultimate goals in the Women of Honor division. 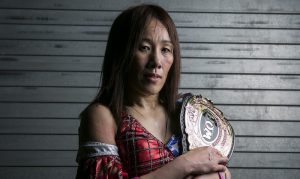 -When do you think the “Women’s Revolution” began in wrestling and which promotion do you believe started it?

“I think everyone knows that WWE coined the phrase ‘Women’s Evolution’. It was something Fit Finlay wanted to do for a long time. I am so happy for all the women in the USA. Finally, girls got a chance to show ‘Girls can wrestle too’. I started wrestling in Japan, and Japanese women’s wrestling is wrestling all the time.”

-Do you have any goals to return to MMA? If so, who would you like to face?

“I wanted to be part of the Ultimate Fighter show, and I trained really hard to get on it. That opportunity didn’t pan out, and since then I have had no desire to return to MMA competition. I have a lot of friends who still compete so I enjoy watching and supporting them, and I still train in MMA because it’s something I enjoy.” 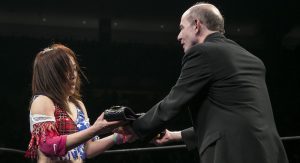 -In the early 2000’s, you famously feuded with Mercedes Martinez, who impressed fans this week with her match in the WWE Mae Young Classic. Are there are women outside of ROH that you would like to face, or would like to see compete in ROH? Who are some of your current wrestling favorites?

“Beth Phoenix is a dream opponent of mine in Women Of Honor. There are many talented women’s wrestlers around the world and I welcome the challenge to those who feel like they can join me in making Women of Honor a better place.”

-What is your ultimate goal in pro wrestling?

“My ultimate goal is to make Women of Honor a place where girls will be inspired to chase their dreams, and hopefully they will aspire to be in Women of Honor one day themselves.”

Glory By Honor streams live worldwide for all HonorClub members on Friday, October 12 at 8e/5p. Available at ROHHonorClub.com or the ROH App on all Apple and Android devices, and Roku.