The events written about in this article took place nearly 20 years ago and are true (to the best of my recollection). 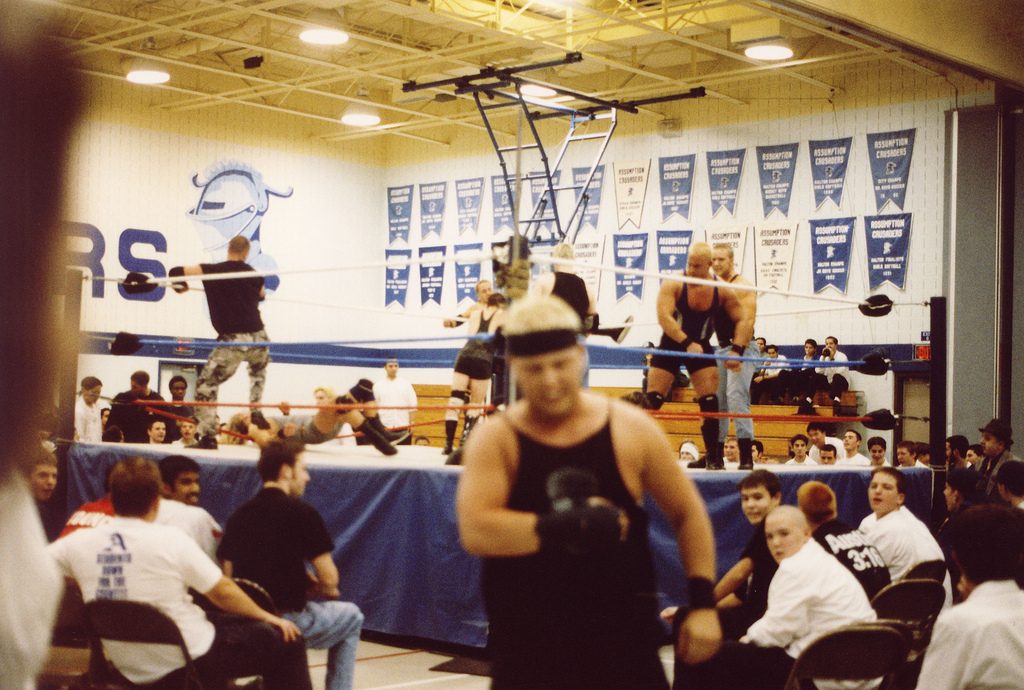 The “Glorious” History of the (Canadian) RWA: Part 2

The guy I talked to at the show, L’Artiste, advised me that the RWA had a training school and that it wasn’t very expensive to attend if I wanted to come along to their next training session to check it out. Now, I was a bit drunk still and very excited so I didn’t even think twice about it and agreed to attend without any follow up questions or queries. I just said “Thank you very much man… I’ll be there!”

A couple of days later, I carefully constructed an email to L’Artiste and tried to not sound like a fucking mark. He responded with the address of the training school in Burlington, Ontario and the time to arrive, which I think was seven pm, after all the boys had finished their day jobs at Staples, The Bay or Kelsey’s Restaurant.

That was it! After loving the business for years and wondering how to get involved, searching through the yellow pages and every magazine I could find for info, even going so far as to order Dennis Brent’s book (it was more like a booklet) from an advertisement in PWI on how to get into the pro wrestling business and getting nowhere, I now had the chance to just walk through the door. I had no idea what to expect or how to prepare but I knew I had to give it a go, if only to satisfy my curiosity.

I rushed out of work, jumped into my 1994 Dodge Stratus and drove the hour to Burlington. When I eventually arrived at the address I was provided by L’Artiste it appeared to be an industrial estate of some sorts and at the time it seemed like a strange place for a pro wrestling school. It was laid out in a square and lined with units with big garage doors that appeared to be mostly places to do shit to your car like tinting, stereo stuff, custom nonsense and other small enterprises that I could give two shits about.

I drove around for about five minutes with The Beatles Revolver album providing the soundtrack to my panic and confusion. I turned off the engine, opened my car door and heard the unmistakable sound of human flesh bumping around in a wrestling ring which sounded like a pile of 2×4’s collapsing over and over again.

I walked towards the sound and once inside saw a handful of people muddling around the ring with two guys inside the ring.  As I stepped inside the building, nobody noticed me at first. I stood there for a minute looking around and taking in the surreal atmosphere. It was a fairly large room with high ceilings, a weight bench, a few crash mats next to the bench and finally the crown jewel of a shitty, beat up, possibly homemade, 18×18 professional wrestling ring. It was beautiful! I’d never seen a wrestling ring without draping around it before. The spring underneath the ring that makes it give a little was strange to see bouncing up and down as the boys took bumps on it. If I had to describe what it looks like I would say that the ring looked naked!

L’Artiste spotted me and yelled over “Hey you made it brother, come over here!” 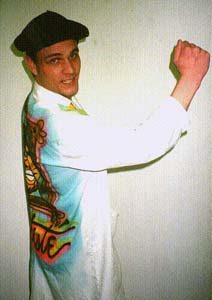 At that, everyone just kind of shrugged and went back to what they were doing. L’Artiste came over and shook my hand and took me around the gym to meet some of the boys. I was introduced first to the ‘All Knighters’ tag team of Joey Knight and Robin Knightwing. They were real life brothers who had been in the business for a few years at this point already. They were nice guys who were very friendly to me with Robin eventually being one of the guys who taught me a lot about working, selling, and psychology.  Years later I found out that Joey was later married (and divorced from) the “Glamazon” Beth Phoenix before she married Adam Copeland.

While I went around shaking hands, I was advised about the “secret wrestler’s handshake” from “Sexy Baby” Jaime Jackson. It was my first day and was very excited to learn it as I had never read about it in any of the publications I was reading at the time. This was a real secret and the first I would learn. It was akin to a magician showing you how one of his tricks work.  I had only recently learned the word “kayfabe”, and though I didn’t really know what it encompassed or how to use it yet. Kayfabe was alive and well in 1998, though admittedly it was on life support and hanging by a thread at this point. I was expected to protect kayfabe and like any real fan of the sport, I was happy to do so. Now I had learned the secret handshake! What I didn’t know at the time is that nearly nobody does the “secret handshake” anymore and I would only ever use it a handful of times in my life when meeting older workers from the generation(s) before mine. Pretty much nobody in my generation uses it anymore and is becoming something of a dinosaur…pity. 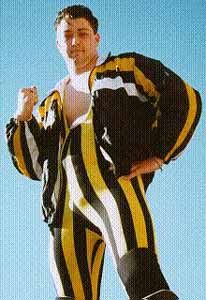 I was nervous as hell and didn’t even know what type of clothing to wear to train for pro wrestling so went with Adidas shorts, a Powell Peralta skateboard t shirt and a red pair of wrestling shoes I’d had since participating in “real” wrestling in high school. I had considered bringing my old wrestling singlet with me to train in but am glad I didn’t as I would look like a damn mark.

There was one other guy there to train that day and his name was Eric. He has a hefty guy who was back for his second or third training session and had traveled here from western New York (I believe) to do so. I introduced myself and nervously asked him what I should expect. He shook his head and smiled, “You’d better start stretching now man — you’re going to need it!”