— TNA runs tonight in Concord, NC at the Cabarrus Arena & Event Center and Saturday in Winston-Salem, NC at the Winston-Salem Fairgrounds Annex with the following lineup…

— ROH runs two events this weekend, here are the details…

205 Live is Bad for Business 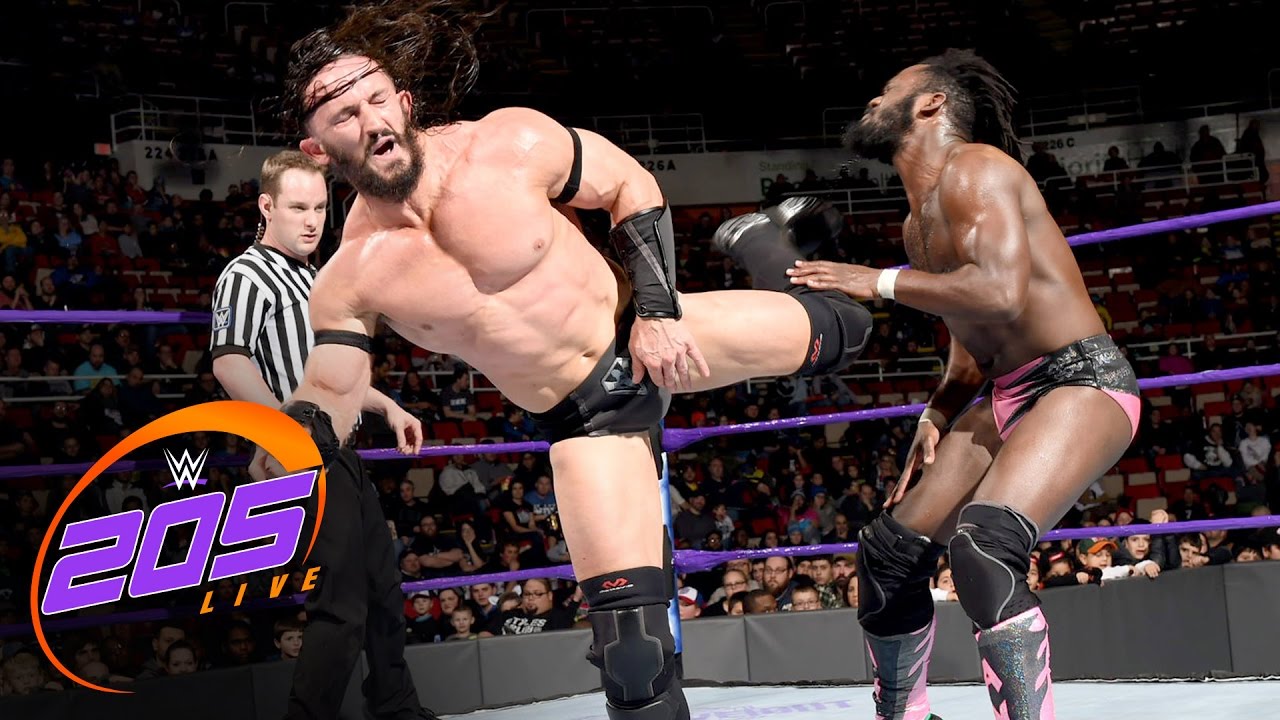 There was a great article written by Dallas Barnes last week that laid out all the reasons why 205 is Must See TV .  I can’t say that I disagree with any of his points, however, I also can’t seem to get passed the fact that 205 Live has clearly impacted the Cruiserweights in a negative way. This isn’t to say that the Cruiserweights themselves aren’t worth the watch, because they absolutely are.  What I’m saying is that the format in which they’re presented absolutely hinders their ability to flourish on the main roster.

If the main storylines are taking place on 205 Live and only a small piece of that storyline is seen on RAW, then what’s the point?  Why should I remain invested?  Is the payoff not worthy of Monday Night RAW?  As is, I’m already investing three hours of my Monday night, but now if I’m understanding correctly, the WWE is asking me for MORE of my time? Listen, I love WWE just as much as anyone else, but this is a bit excessive.

It’s perplexing that within the three hours of RAW that this division is at times only given one segment to get across what’s going on in ANOTHER show.  It’s as if WWE does not want to the division to get over with a broader audience, which is completely mind bottling since I’d bet that a large portion viewers in the 28-34 demographic got drawn to pro wrestling via the Cruiserweights on WCW programming in late 90s.  Additionally, the Cruiserweight division is the easiest division to keep PG and remain entertaining.  It’s the only division that character development does not have to be the top priority.  Instead, they can rely on their bread and butter, which is telling stories in the ring via high flying action that cannot be seen anywhere else.

I know what some people will say, which is that 205 Live gives other superstars the chance to shine and get noticed …. but does it?   Does it really get them noticed?  Maybe it does, but I’d bet that getting two minutes of TV time on Monday Night Raw is more impactful to their character and career than three weeks on 205 Live.  Think about it, James Ellsworth was given a 10 second promo and two minutes with Braun Strowman on Monday Night Raw and this past April he was skipping to the ring down an 80 yard ramp at WrestleMania in front of 75,000 people.  So while I agree that it gives them exposure, I think it’s the wrong exposure for a new division.

Now, I said before that I didn’t disagree with any points from Dallas’ article, however I need to retract that.  Neville’s King of The Crusierweights was not born in 205 Live nor did it contribute to any of his success as a heel.  That’s all Neville.  His promos on RAW, his heel turn on RAW, his athleticism on RAW is why he has gotten to the level he’s on.  205 Live is merely his testing ground for his performance on the main roster.  If anything, I’d argue that the purple ropes that he was forced to fight between did him actual harm.  The simple coloring of the ropes was a statement that Neville was separate from the Main Roster, which couldn’t be further from the truth.  Pound for pound Neville is easily one of the best performers within the WWE and he has single handily kept this division afloat. WWE is fortunate that he has the credibility and ability to back it up each and every night.  This is why guys like Swann and TJP didn’t work out with the title and why Neville has held it for so long.

If you’re the Champ and the crowd goes to take a piss break when you’re in the ring, there’s a problem.  It’s even worse when they see the ropes being changed, leave to hit up the merchandise stand and don’t even hear your theme music … “but don’t worry folks, because whatever you miss here you can see on 205 Live!”.  To me, this makes a statement.  A statement that says, if you don’t want to watch, don’t worry about it, because this is anything but Must See TV.

So while 205 Live is a great show, it’s NOT best for business.  It’s not best for the talent on the show and it’s certainly not doing the fans any favors.  If anything, 205 Live is robbing the fans of an experience to see the world’s best high flyers on the world’s top wrestling promotion by a country mile.  If I had it my way, the division would be gone tomorrow and the WWE would host an annual C.W.C. tournament to determine a #1 contender. Not only would the winner of that tournament become the #1 contender, but the Championship match would headline a WWE “B” PPV like BattleGround or Backlash.   This would allow the Cruiserweights to establish themselves in front of the WWE’s primary audience and bring credibility and eyes to their division within the WWE main roster.

In summation, I want to make it clear that I like the show, 205 Live.  It is “Must See TV” from an action standpoint, but unfortunately in order to be successful it also “Must Make Sense.”  At the moment, I don’t think it does.  It’s just simply not best for business. 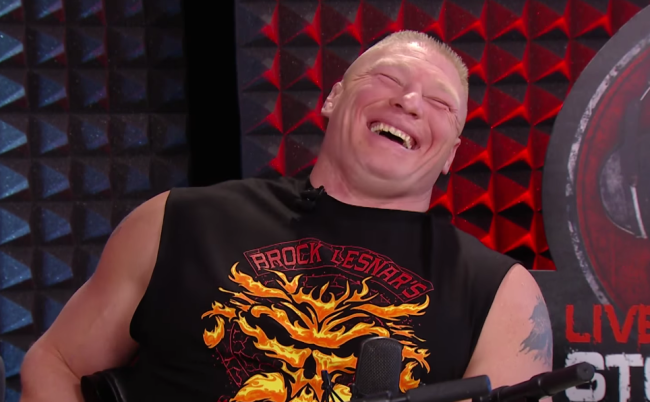 I’m not going to bother diving into all the facts around this Brock “situation”.  The suspension, the timing, the USADA testing pool, the event at MSG etc… As The Rock would say, it’s all a bunch of hot garbage, ya jabroni. None of it matters.  All you need to do is use a little common sense and realize that Brock Lesnar is a real life human being.  Sure, he’s a BEAST, a CONQUEROR, but despite all of that, at the end of the day he’s a big jacked dude who is both a husband and a father.

Let’s assume Brock doesn’t even enjoy working for the WWE anymore.  That he doesn’t enjoy being in front of thousands of people while sending WWE Superstars to Suplex City.  If we assume all of that, then I still don’t see how there is any way possible for a person with any level of logic to turn down his return on investment.  We’re talking around 20 shows a year max, at $3MM per, and apparent paid travel.   Not to mention, the guy is 40 years old and has adopted a style that doesn’t require him to map out and develop 5 star matches.  Bottom line is, his return on his investment is far too large to ignore.  Even if by some miracle that he were to fight for UFC in November, you can bet your last dollar, no wait, you can GUARAN-DAMN-TEE that you’d eventually see Brock Lesnar in a WWE ring again.

So let’s use some common sense, shall we, and take a break from the “dirt sheets”.   I want you all to put yourself in the same situation.  Whether you’re working construction or sitting behind a desk 9-5, if someone were to offer you 15% of Brock’s deal, would you wake up, get ready, drag yourself out of bed and take a crowded train at rush hour even if you hated it?  Hell, I imagine most of you already hate your day jobs, yet you still go.  And I don’t want to hear that “Brock doesn’t have to work anymore, I have to work!”  Please! Save it for someone else.  We’re not talking about chump change here, we’re talking millions. And I mean seriously, if there is one thing that EVERY wrestling fan in the world should know by now, is the fact that no matter who you are, EVERYBODY’S GOT A PRICE! 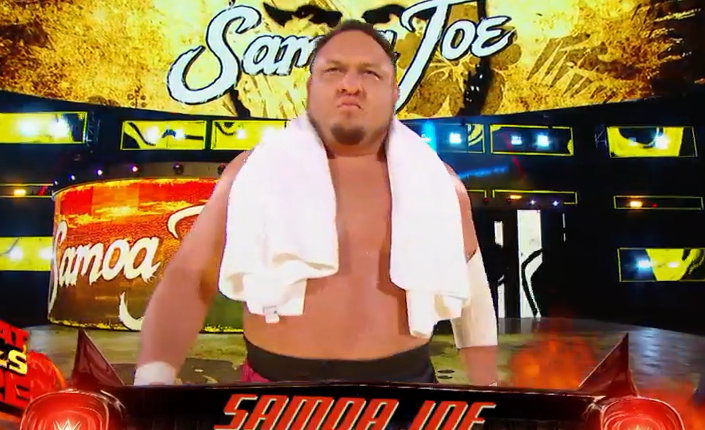 After last night’s Monday Night Raw it’s pretty clear that Samoa Joe’s stock is rising at an alarming rate and now is the time to buy, buy, buy. Whether it’s crowd reactions or the brutality he brings both physically and verbally (I’m talking to you, Roman), the guy is connecting in a big way.  At WWE Great Balls of Fire, Joe gave Brock Lesnar arguably his most physical contest in recent memory.  It was even reported that Lesnar was extremely pleased with Joe’s performance and that his ability to “keep up” with The Beast was a breath of fresh air.  For some of us, this isn’t a surprise, as Joe has been widely considered one of the industry’s best even before his arrival in NXT.  I myself can admit that I was speculative of the Samoa Joe hype train, but now, I feel foolish, because if there’s any train I’m looking to catch, it’s the Joe Line.

At Great Balls of Fire it would be Joe, not Lesnar setting the tone and before you could utter the line “you shake my nerves and you rattle my brain” Lesnar was on the ropes so to speak, getting attacked from behind, taking a Uranage through a table and enduring multiple coquina clutches.  In a match where logic and booking pointed squarely in the direction of Lesnar, it was doubt and not certainty that started to make its way into the minds of wrestling marks everywhere.  Could this be it? Could Joe shock the world and become Champion during one of the worst named PPVs of all time?  While in fact that didn’t happen, and The Beast did halt the Samoan Submission Machine’s path to victory with an F5, you could argue, as did Joe last night, that he “had [Brock’s] number.”

Also, let’s not just limit Joe’s momentum to his impressive showing of physicality.  As I mentioned in my opening, Joe’s ability to spit fire on the mic has also raised eyebrows.  We all knew he could talk, but I don’t think we all knew how believable he could be.  Is wrestling scripted, yea, but I also don’t think that Joe’s seemingly bent up aggression is a footnote on a writer’s script. (i.e. insert passion here).  Joe’s emotion is RAW, pun intended.  It’s as real as it gets.  He even made those around him better.  I mean, did you see the emotion he evoked out of Lesnar?  In fact, I challenge anyone reading this to please tell me the last time Brock Lesnar looked this eager and this excited to be talking on the mic. Now typically here I’d say I’ll wait for a response, but the fact is, I won’t get one and thus, I’d never finish this blog. So let’s carry on and take what I just said as law.

Lastly, you can tell that reaching this level in his career is extremely personal to him – more so than others in the business. He spent an entire career in other wrestling promotions, all under the guise of “Samoa Joe is a great worker, one of the best in the business never to be in the WWE.”  Well, now that man has arrived.  He may have been here for sometime already, but at the Great Balls of Fire, he made it official.  He’s not a rental, he’s an owner. The WWE is now the home of Samoa Joe.