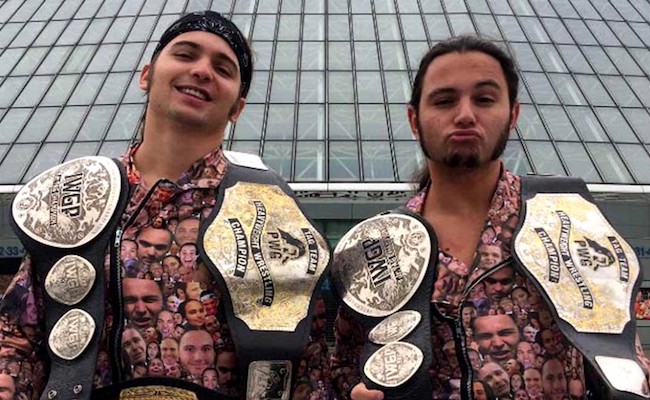 On using social media to grow their brand:

Nick: I think after we asked for our release in TNA, because we realized we’re not going to be on Spike TV every week now. We didn’t have anything, and we had to use what we had and that was social media. We knew that we were outgoing – and our personalities are pretty out there and kind of crazy – so we were like, let’s just up it up a little on Twitter. It sort of happened that at that time we had a little incident backstage with WWE and Booker T and he didn’t like us. He said we were disrespecting all the veterans backstage, which was pretty far-fetched. From there it added to our characters, so we were like, “You know what, the Internet thinks we’re cocky and arrogant, let’s just act like we are and make it a whole gimmick.” At that time, no one was doing it on Twitter, so we tried that, and it worked. We were getting bookings just because how arrogant and cocky we were acting.

Matt: It’s funny because I think I’ve been privy to social media. I think I was the first person that had my Twitter handle on my gear, and I’m talking TNA days. I had @GenMeMax on my pants. [The Young Bucks’ were known in TNA as Max and Jeremy Buck with the team name, “Generation Me.”] As far as playing a character, like Nick said, I think it was when that Booker T incident happened. We decided not only to not deny what everybody was talking about but embrace it in a way. Again, we don’t have the luxury of cable television and all this TV time to get over a character. However, we do have 140 characters – now 280 characters – to get ourselves over. You better believe we’re going to use those tools. Every picture we post, every Tweet we post – it’s all building blocks to what we’re making a creating as characters. We always joke around that, no matter what, if we’re booked weak somewhere, it doesn’t matter. We want to be bullet proof, because ultimately, we have control over our characters and we will book ourselves as the strongest wrestlers in the world as long as we’re in control. And with the way we do things, we’re in full control. If you’re a wrestler and are only as over as your push, you’re in big trouble. You have to control your own destiny. Nick and I decided a long time ago that we’re tired of anyone controlling our destiny. That was one thing we learned in TNA – they didn’t book us right and we weren’t over, so who’s fault is that? Theirs a little bit, but ours, too.

On their future and WWE’s current interest in them:

Nick: We have 13 months left on our current contract, and I have no idea what we’re going to be doing in 13 months. [Editor’s note: The Young Bucks have a written contract with Ring of Honor and a “handshake contract” with New Japan Pro Wrestling, according to Nick.]

Matt: What’s so funny is that, only in pro wrestling, can a company threaten legal action on you, but then probably offer you a job a year later. Of course [the WWE]is interested. They’d be interested in just taking us just so New Japan and ROH doesn’t have us. In no other business would that be a thing.

On choosing to stay away from WWE:

Nick: That has some to do with it. Other parts, the schedule’s just crazy and there’s a lot of elements to that. There hasn’t been a right situation for us to go there, so that’s why nothing’s ever gotten to the point where we did go there. There’s never been a scenario where they called us or pitched an idea or any of that. The only communications we’ve really only ever had was a few years ago. They wanted us to come in for a tryout and at that time we felt like we were above tryouts, because we felt like we had enough work for them to watch and we didn’t have to go there to do that. That was the last time we really communicated with them about coming to work there, but now I don’t know. It would have to be a situation we’d be comfortable with and a situation we really wanted to do, because like Matt said, we’re in control of our characters now and we’re having a blast and we like our schedule. We’re very happy.

Matt: It’s funny, because when you’re a teenager your goal is to go there, and you don’t care what the circumstances would be, you just want to go there. But now, when you mature as an adult and a performer and you’ve built these characters and personalities for years and you do it yourself like Nick and I have, now we’d have to hand over the keys. And that’s terrifying. It’s like, “Here’s all this hard work that we have done, now please, please don’t ruin it.” That’s difficult and that’s a gamble.

Nick: Oh, for sure. What it does is it makes us feel like we’re making the right decision currently, because we’re happy, we’re not mad, we still love professional wrestling, we’re not burnt out, our families are happy, we’re healthy. When we see things like that, we feel like we’re making the right decision. Maybe it’s good that we didn’t take a risk a few years ago and stuff like that.

At the same time, we have friends like AJ Styles who just became world champion again and we know how much money he’s making. There’s always that golden spoon over there, but for us as a tag team we know that some things like that would never be achievable. It would really just be a fake dream and it wouldn’t be something that we’d be interested in. I never got into the business wanting to main event a WrestleMania. I wanted to do cool things with my brother. I hate when most wrestlers say when you get into wrestling, your main goal should be to main event WrestleMania. No, it shouldn’t be, because that’s fake. No one does that. Only a certain amount of people do that. It’s like winning the lottery. If you get into wrestling thinking that you might be able to do that, let me cut your dream off right away and tell you it’s not happening.

On reaching out to CM Punk:

Matt: I talk to him a lot. I bugged him for like, I don’t know, a year or two? I was really aggressive and at one point I realized that I should probably let him make his own decisions. He knows that there’s an offer there and he knows that I’m the first phone call that he should make if he decides to get back into the business. He’s told me that, he says when or if or ever he does decide to possibly get back into it, I’ll be the first guy he calls. It’ll be interesting. Whether or not he plays on our team or an opposing team, it’d be fun. When we’re talking about guys, another guy would be Bryan Danielson [WWE’s Daniel Bryan]. I don’t see him necessarily joining Bullet Club, but he’d be a fun guy to wrestle or to work with or whatever. Just to have him in the ring with us would be incredible.