This past weekend we had the pleasure of sitting down with Ring of Honor and New Japan Pro Wrestling superstar Cody Rhodes, as the self-proclaimed “American Nightmare” discussed the long journey he’s been on over the past two years, turning his bold vision – an independently funded wrestling show capable of drawing 10,000 fans – into a tangible reality.

Our conversation with the former WWE Intercontinental Champion came just moments before tickets for that very same event went on sale, completely selling out in less than 45 minutes. But one infamous name that did not partake in the celebration sweeping across the Windy City of Chicago, which will host ALL IN on September 1st, was former WWF and WCW writer Vince Russo. 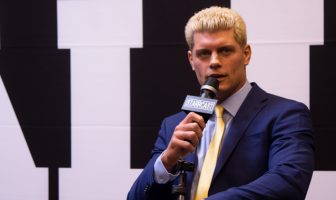 In the days leading up to ALL IN’s highly anticipated on-sale, Russo was briefly announced for the Starrcast podcast convention/legends meet-and-greet, which will take place nearby during the three days leading up to the big event. However, as quickly as he was announced, all traces of his name and website – The Brand – were removed from Starrcast’s website and social media.

It was Cody Rhodes who had heard about Russo being booked for the event (Starrcast is being run in collaboration with ALL IN, but is being handled by a separate team) and swiftly pulled the plug. He later took to Twitter simply stating, “We don’t reward bad behavior. Stay away from our event.”

Now, if you’re curious about WHY the controversial creative writer-turned-podcast host was pulled, or the “bad behavior” that Cody was referring to, that’s a bit more complicated…

In recent years Russo has become synonymous with long, “bro”-filled rants that he frequently issues on his website, podcast and live video shows. While he adamantly denies any and all claims, Vince has repeatedly come under fire from numerous media outlets and fans alike accusing him of everything from sexism to homophobia, and more recently, antisemitism.

Russo doubled down on his problematic personal views by insisting that women’s “most important job” is first and foremost, motherhood. 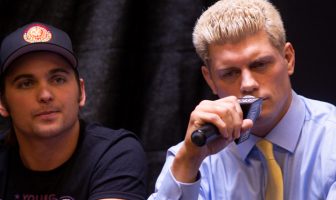 When we talked to Cody Rhodes this past weekend about Vince’s potential involvement with ALL IN and/or Starrcast, he admitted that he wasn’t overly familiar with his body of work but didn’t feel it was appropriate to have someone caught up in so many scandalous comments and reports featured at the upcoming events.

“I don’t mean to take his accolades away,” Cody told us. “His name got caught up in a lot of modern issues he had with homophobia and things of that nature. That’s not getting heat, that’s being an idiot. That’s being naive. That’s being ignorant. The wrestling world is open to everybody.”

The “homophobia” that Rhodes is referring to stems from yet another Russo rant, this time from a 2017 episode of his show Castrating the Marks, where he infamously criticized male wrestling fans who chant things like “this is awesome” at WWE and NXT events for “homosexually” reacting to male wrestlers in a way that he deems “abnormal”. During the show, he claimed, “Men do not react to other men that way. It’s not a normal function.”

Upon hearing our interview with Cody this weekend, Russo took to his Twitch channel to record an angry, impassioned rant spanning more than 40 minutes entitled (in all caps) “VINCE RUSSO ABSOLUTELY OBLITERATES CODY RHODES AND HIS ‘HOMOPHOBIC’ COMMENTS”.

During his speech, a very clearly upset Vince Russo called Cody names like “jackass”, “child” and “mark”, despite insisting that he would never stoop so low as to insult a man he didn’t know personally; a clear attempt to take the moral high ground. 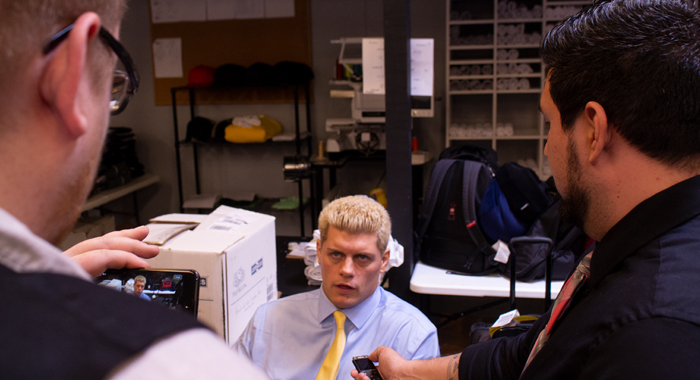 He then told a story involving a pair of neighbors he had while growing up, that used to take him to the movie theater and sneak him alcoholic White Russians. Russo stated, “My parents were best friends with [them]when I was growing up. Mr. Blanchard and Mr. Gardener used to take me to the movies, and I would get so excited. I remember these things vividly. I freaking loved these guys.”

Despite his affection for his childhood neighbors, Russo claimed numerous times that he didn’t even know they were homosexuals until much later in life, possibly weakening his own argument. “I did not even know that [they]were gay, bro. I didn’t even know what gay was at that time. Gay at that point wasn’t what it was today, bro.”

Because the interview took place on Mother’s Day, Vince also took the opportunity to insist that anyone who calls him a homophobe, sexist, antisemite or any other such label is actually taking a shot at his parents for raising him that way. “When you make accusations like that about me, you’re saying that’s how my parents raised me,” Russo angrily shouted. “Cody Rhodes, get your freaking big head out of your ass.”

Despite all of this, the podcast host has invited Cody to come on his show to discuss the issue face-to-face. Or rather, as face-to-face as you can possibly be through the safety of the internet. Regardless of what side you fall on, that will definitely NOT be happening.

“I tried to be as polite as I could that he’s nowhere near our event, and that’s gonna stay that way,” Rhodes informed us. “No, I’m not doing his podcast. I mean no disrespect, but that’s the end of it. He could tweet at me every day for the next ten years – we’re done.”