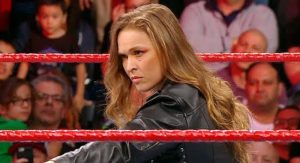 Since its very inception WrestleMania has been fueled by celebrity guests and pop culture tie-ins. From the very first WrestleMania where Mr. T partnered with Hulk Hogan, to the Battle of the Billionaires, to Regis’ hilarious backstage interviews and beyond; the Grandest Stage of Them All has always been made just a little more “grand” by the presence of Hollywood Elite.

In just two weeks the icon of women’s MMA and one of the most popular names in the last decade of global sports steps into the wrestling ring to compete in her first ever WWE match. Ronda Rousey, the former UFC Bantamweight Champion. Kurt Angle, the Olympic gold medalist and Hall of Famer. Triple H, the 14-time world champion and King of Kings. Stephanie McMahon, the “Billion Dollar Princess” and heir apparent to the throne. It’s a medieval fantasy story that practically writes itself!

With Ronda making the jump from celebrity guest to full-time WWE Superstar, we’ve put together a list of the best NINE mainstream outsiders who have come in and competed at the Showcase of Immortals.