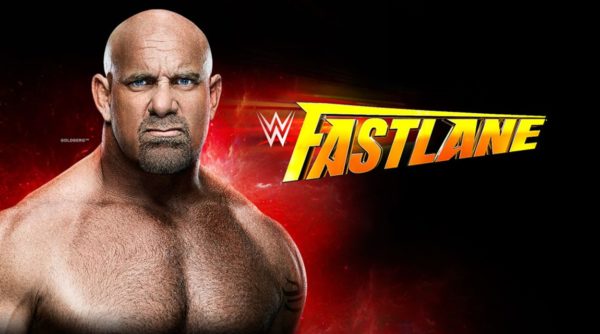 So it’s PPV Sunday. Which means predictions. Because what else is there to do of a Sunday afternoon whilst you wait? But in addition I thought I’d add some thoughts from the week.

– Bayley’s decision to keep the title has left a sour taste in some fans mouths, disliking her move from whiter than white to accepting the shenanigans that came with her title victory. Whilst I can’t say I was 100% behind the move, or her winning the title in the first place at that time, I’ve grown to like it. Deviation from consistent character can be a bit of a shocker, but it is also what we call character evolution. Little tweaks are what keep a character going. Every now and again, they need a little jolt, otherwise consistency becomes staleness. More importantly, it is a good lesson for all her young fans. You can be nice, you can smile, and you can live your dream. You can live Hug-Life. And now, most importantly, you don’t have to be a f’ng mug either! Lift that title high. 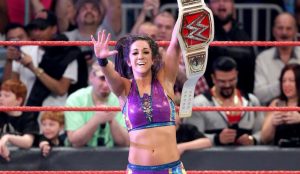 – Titus O’Neill always comes off on everything other than Raw as a genuinely nice guy and a solid role model. Why is he still wearing the black hat?

– There were three matches on Smackdown Live. Three.

– WWE really needs to stop using old pictures of Goldberg to advertise him. That white goatee is a badge of honour, give it some love.

– Is anyone else wondering if Foley still has enough in the tank to make something memorable with Braun Strowman happen at Wrestlemania? Possibly with his GM job on the line? Respect the legend.

– I don’t like tag teams with a clear weak link. Or rather, I don’t like the idea of them. Big Cass may as well call Enzo his little buddy. I like them as a tag team, but Enzo needs a bit more in ring credibility. And you can teach that.

– I hate the kick off show. It’s like being told you didn’t quite make the cut, but the important people aren’t quite ready just yet, so go dance for the people. You’re basically a fluffer. And that’s cruel.

– The finish to the chairs match between Apollo Crews and Dolph Ziggler left me brutally disappointed. Since when were low blows enough to pin a guy again? The match had been decent until that point too. Atomic drop on a chair, seriously?

– Gallagher is not a gentleman’s name. It’s a rough and ready, straight from the ports, commoner name. I’m related to a few. Good people, not ones to stand on ceremony though. That being said, is there a worse name in WWE than Neville?

– In my experience, no woman likes being referred to as sturdy. They don’t like solid, either.

– Luke Harper again had a good match. Where does he go from here though? And maybe it’s time to buy a new vest? Or just generally update the attire. You’re your own man now, Luke. Fix up…. 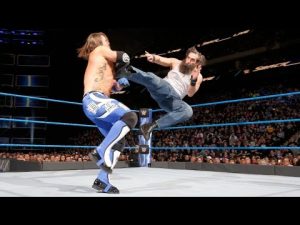 Fastlane starts the final push towards Wrestlemania for the Raw side and on paper at least, looks a fairly decent card. Can’t say I’m overly enthusiastic about the main event but the rest of the card either has me interested or should at least be a decent match. I, like many, had some trepidation about the draft bringing back separate PPV’s, but so far, so good. This card is also missing Jericho (and the US title), Cesaro, Sheamus, New Day, Rusev, Big Show and of course, Brock Lesnar. Not bad at all. 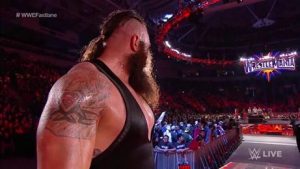 Let’s get on the Road to Wrestlemania

I’m really enjoying the ongoing story between Tozawa and Kendrick and expect it to carry on past tonight. Swann and Dar seem to have been added just as buffers for one of the few stories on 205 Live. Expecting Tozawa to get the win on Dar with the Snap German Suplex after Kendrick scarpers under the flag of teaching another lesson. Although, Kendrick could make Swann tap as part of another lesson…..No, going with Tozawa winning, but not getting his hands on Kendrick. Save that for another day.

Set up by Stephanie McMahon on the Raw beforehand as a way of keeping Sasha away from the Women’s title match, I can’t see what is gained from having Sasha win. Nia’s claims of having ‘broken the Boss’ give her great reason to want to beat the locomotive that is Nia, but there has to be more to gain from having Nia Jax appear unstoppable. Sasha could go down heroically, whilst Nia could look even more devastating. Anything else would seem like a wasted opportunity. Also, you would have to think that one day down the line, these two will face each other with the title on the line. Building up that Sasha struggles with Nia would be a wise investment for that story.

I was disappointed that Cesaro and Sheamus and The Club were not allowed to beat the hell out of each other in a brawl we all know they could produce and would be great to watch. Cesaro and Sheamus are still hanging around the title picture so I would expect a three way tag match at Wrestlemania, or possibly a street fight between the European team and the champions after retaining tonight, The Club. Or maybe that’s just what I want to see. Either way, despite Big Cass pointing out they’ve never been champs, I can’t see him and his little buddy pulling it off tonight. Although as far as Wrestlemania goes, landing your first team championship? That’s the kind of thing Wrestlemania moments are made of. Leave it till then.

Neville vs. Jack Gallagher for the Cruiserweight Championship

WWE finally found a pattern when they gave Neville the championship. The quick-fire championship changes were not helping establish the belt but under Neville it has found stability. I would expect a multi man, dangerous, possibly ladder  type of match for the title at Wrestlemania, (hopefully not on the kick off) and I would expect Neville to walk in still champ and leave still champ. Gallagher is doing well and the crowds are in his favour, but 205 Live is better all round with Neville sitting atop the pile. Hopefully, things can really step up when Austin Aries gets involved, and Tozawa finds his feet. But for now, a long title reign for the King of the Cruiserweights has to be the right option.

Joe. It has to be really. He’s just debuted as the ruthless destroyer on the Triple H payroll. He injured Seth Rollins. He pinned Roman Reigns and Cesaro. Sami Zayn will put up a great fight, allowing Joe to show the mainstream WWE universe (surely there’s not too many wrestling fans who don’t know what Samoa Joe is about?) what he’s all about. Samoa Joe must continue his destruction against the plucky but soon to be choked out underdog.

Bayley vs. Charlotte Flair for the Raw Women’s Championship

Can Bayley win it on her own? (Can Charlotte?) Can Charlotte be beat at PPV? Did they really spend sixteen months building up her streak as the ‘Queen of PPV’ just to throw it away before Wrestlemania? No is going to be my answer. I can’t see anything other than a Charlotte win. It’d be nice to see Bayley burst into Wrestlemania as champion but I just don’t think this is the show for Charlotte’s first PPV title loss. I’m not too certain on how it happens, but I’d love a ‘refusal to tap and passing out’ scenario. I have a soft spot for the classics. 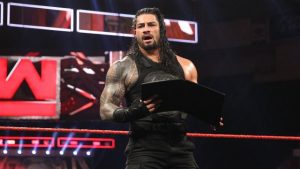 I have loved the build up to this. Reigns has thrown everything at Braun but the Monster Among Men has looked unstoppable. At every turn, he has had Reigns’ number. Reigns has not backed down though and the exchanges between the two of them have been highlights each week. I’m thinking of a lesser version of Reigns vs. Lesnar before Rollins got involved. Strowman destroying Reigns but becoming increasingly frustrated at being unable to put him away could work nicely for both of them. I expect The Big Dog to overcome, to show the sort of heart and resilience usually cheered by the WWE audiences. How the crowds react is a greater mystery, but Raw on Monday is Chicago. I imagine that will be a tougher crowd for the beaten, bruised yet victorious Reigns.

Kevin Owens vs. Goldberg for the Universal Championship

I’m not looking forward to this. I don’t see a classic ahead of me this evening, although I’d love to be wrong. The main elements are from the possible interference. Will Jericho come seeking revenge and cost Owens the title? Will Lesnar cost Goldberg? Will Lesnar aid Goldberg so he can fight for the title at Wrestlemania? Will Jericho cost Goldberg because he wants to take the title from Owens? Will Owens stay out of the ring for the first five mins to drain the life out of the crowd and Goldberg? There are many possibilities but I’m not looking forward to it because I expect a Goldberg win. And I’ve no real desire to see two part timers fight for the top title when neither will be around to defend it and it will not be needed for their match. Actually scrap that, I’m just not that excited about Lesnar vs Goldberg. The less than two minutes match was a great surprise. And the Royal Rumble altercation was a nice point to a continued feud. But I just don’t see a great match coming from them two. Here’s hoping Owens retains, and him and Jericho light up Wrestlemania for the Universal Championship, fuelled by the fires of betrayal and built on the ashes of the Festival of Friendship. I’ll keep my fingers crossed.

Heel heavy, I guess, but necessary in some cases. Joe needs to win, Neville needs to win, Club and Charlotte likely to win. Should be a good show, if not the most memorable. It’s showtime…..

Feel free to comment, abuse, condemn, agree or share your opinion in the comments or @HeneghanCiaran or [email protected]