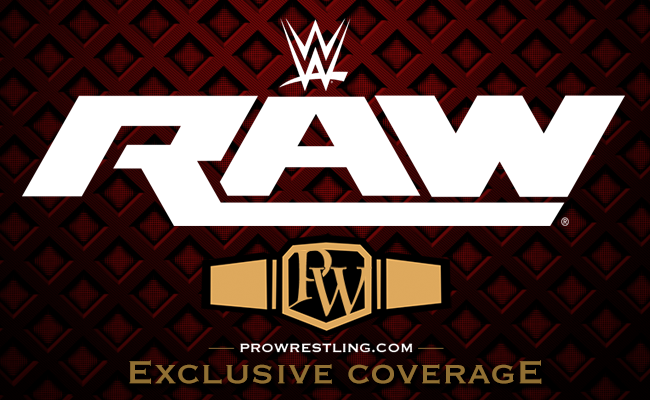 Welcome to ProWrestling.com’s exclusive live coverage for WWE Monday Night Raw. Refresh this page for updated results throughout the night, and be sure to join the discussion in our brand new comments section down below!

– Michael Cole welcomes us to Monday Night Raw in Portland, Oregon as the stage is completely decked out in tables, ladders and chairs to promote the upcoming pay-per-view.

Raw GM Kurt Angle came out to start the show off right. The WWE Hall of Famer put over the return of The Shield at WWE TLC next weekend, but before he could go any further “Sierra-Hotel-India-Echo-Lima-Delta” sounded around the Moda Center to an enormous reaction. For the first time in more than three years, all three members of The Shield made their way to the ring through the crowd, completely decked out in the classic black swat gear.

Angle asks the crowd if they wanted to hear from The Shield and gladly handed over the microphone. Roman Reigns said he made a good choice, because when the Hounds of Justice hit the ring you either get out of their yard, or you get your ass beaten down. Seth Rollins told his partner to take it easy. He told the story of The Shield getting together five years ago and taking over the wrestling world, claiming that they were better than ever in 2017. Dean Ambrose seemed giddy at the thought of all the weapons he gets to use at TLC, saying that The Miz and Braun Strowman should be terrified to get into the ring with them. He doubled-down on the fact that they’ll face any amount of guys on any night, and issued a challenge for someone to come out and give them a fight.

Braun Strowman’s music hit and all four members of Team Miz came out to the stage along with Curtis Axel. Still no Bo Dallas for the second week in a row. Angle told everyone to calm down, and put over tonight’s main event featuring Strowman and Reigns locked inside a steel cage. Plus we’ve got Rollins and Ambrose defending the WWE Raw Tag Team Championships against The Bar, and a special edition of MIzTV featuring Strowman.

Who’s ready to walk with Elias? Apparently the answer is Karl Anderson and Luke Gallows, who were already in the ring with The Drifter. The Club spent some time “warming up their vocal chords” by doing random, ridiculous things and singing the Honkey Tonk Man song. They mocked Jason Jordan calling him a nerd in song, but were cut off by his music as a trio came out for the first match of the night.

Jordan launched off with a bunch of great looking suplexes and the babyfaces cleaned house, sending The Club flying to the outside as they cut to commercial. After the break Anderson was in control of Crews on the mat, keeping him grounded with quick tags to Gallows. He made the hot tag to Titus and an all-out brawl broke out. Bodies flew everywhere as the referee completely lost control. At some point Apollo had tagged back in and connected with a spin-out powerbomb on Elias to pick up the win.